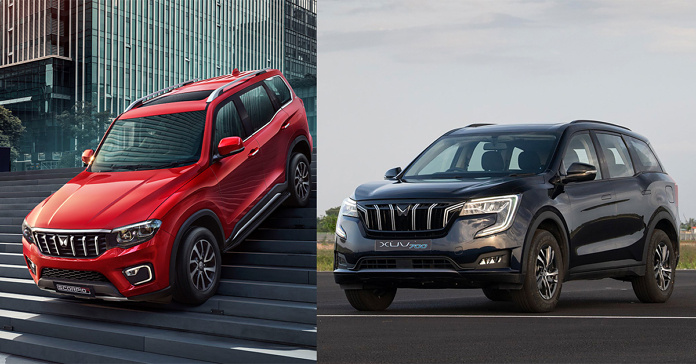 Learn how the two most talked-about SUV products of Mahindra differ from each other.

Mahindra launched its much-awaited 2022 Scorpio N on Monday, June 27th. And with the Mahindra XUV700 already earning huge success in the Indian markets, the automaker now stands strong with two tough contenders in the SUV segment. Let us see how these two car models are different from each other.

Appearance-wise, the Scorpio N has a more muscular and boxy appearance, whereas the XUV700 looks more urban with its curvy silhouette. Elements like the front bonnet, wheel arches and bumper design look beefier on the Scorpio as compared to the XUV700, while the roof is flatter. The two vehicles can be separated easily by their rear looks. The 2022 Scorpio N comes with a rear door while the XUV700 features a regular hatchback. Additionally, the new Scorpio flaunts vertical taillights, unlike its sibling.

The 2022 Scorpio N is powered by a 2.0L turbo petrol engine delivering about 200bhp of maximum power and 370 Nm of peak torque. Its 2.2L mHawk diesel engine has two states of tune. It delivers 132ps and 300Nm of torque in its lower-spec variant, with a 6-speed manual transmission and RWD. The top-spec variants get the diesel engine with the tune of 175ps power and 370Nm torque for manual and 400Nm torque for automatic transmission.

Coming to the XUV700 powertrain options, it features a 2.0L TGDi turbo petrol unit delivering 197bhp of maximum power and 380Nm of peak torque. It gets a 2.2L turbo diesel engine that delivers 185ps power and 420Nm of torque with a 6-speed manual and 450Nm torque with 6-speed automatic transmission in the top-spec variant. Its lower-spec trim gets the diesel engine with 155ps of power and 360Nm torque, with only a manual gearbox.

Hence, on the front of mechanical specs, the two cars source power from similar petrol units whereas the performance of the diesel engine packages of the Mahindra XUV700 seems better than the Scorpio N.

The all-new 2022 Mahindra Scorpio N has been introduced at a starting price of Rs 11.99 lakhs (ex-showroom) for its manual petrol variant and Rs 12.49 lakhs for its manual diesel variant. As per the brand, the introductory price will only be applicable for the first 25,000 bookings of the new SUV. The prices of its automatic transmission and 4WD variants will be announced by the brand on July 21st this year.

Speaking of the Mahindra XUV700, its price starts at Rs 13.18 lakhs (ex-showroom) for its manual petrol variant and Rs 13.70 lakhs for its manual diesel variant. This makes the all-new Scorpio N a more affordable option amongst the masses.