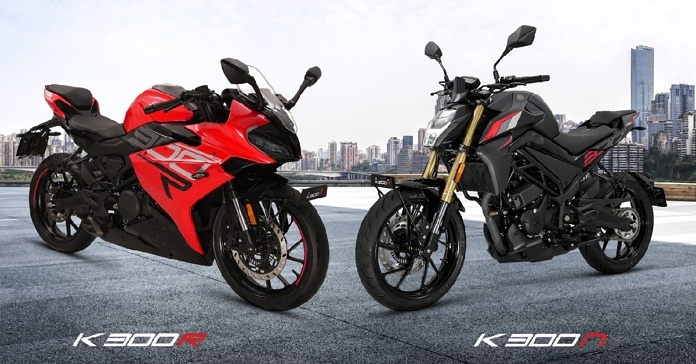 Keeway India has launched two sportbikes, Keeway K300 N and K300 R. Both bikes share the same platform and underpinnings. The price for K300 N starts at Rs 2.65 while the K300 N will be launched at Rs 2.99 lakh. This launch comes after Keeway debuted its Benda V302C cruiser last month at Rs 3.89 lakh. Keeway seems keen on expanding its portfolio in India, and we may see more releases from the Hungarian motor giant next year.

While both motorcycles share the same platform and underpinning, the key difference between them boils down to the design and style profile. Both bikes have a menacing front look and come with a split-seat setup, an angular fuel tank, and an underbelly exhaust. The K300 N has a more ‘naked sportbike’ look while the K300 R looks like your regular sportbike. When it comes to colour options, the K300 N is available in Matte White, Matte Red, and Matte Black, while the K300 R comes in Glossy White, Glossy Red, and Glossy Black.

Powering the two bikes is a 292.4cc liquid-cooled, single-cylinder engine that produces a maximum power of 27.50hp and 25Nm torque. Both bikes also get a 6-speed gearbox paired with a slipper clutch. Suspension duties are handled by a 37mm fork up front and a mono-shock unit at the rear.