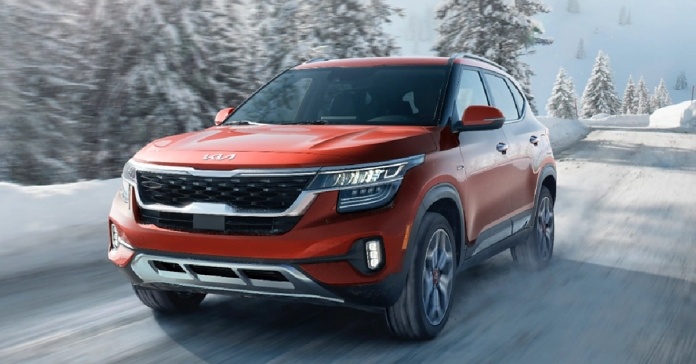 We take you through what’s new in the revamped midsize SUV.

Kia has finally taken the wraps off the 2023 Kia Seltos facelift. The midsize SUV will make its debut appearance at the Busan Motor Show to be held in Korea on 14th July. The new Seltos will be launched in the international markets first, followed by the Indian launch next year. According to certain reports, the SUV will make its first appearance for Indian audiences at the 2023 Auto Expo in January next year.

The new facelift model gets significant upgrades on the exterior, with newly designed headlamps and fresh LED DRLs. The front bumper looks different too, courtesy of a few design changes and a new aluminium skid plate. The side profile remains unchanged apart from a set of new alloy wheels. At the rear, the design of the LED tail lamps has been freshened up as well, with the L-shaped LEDs making an appearance.

One look at the inside reveals the new 10.25-inch infotainment screen, along with a new rotary dial. The dashboard remains unchanged. The higher-end models may see a 360-degree camera as well. On top of that, the new 2023 Kia Seltos will come with the ADAS (Advanced Driver Assistance System) suite too.

Under the hood, the Kia Seltos will feature the same engine, with no changes whatsoever. It will be continued in the previous 3 variants – the 1.5L naturally aspirated petrol engine, 1.4L turbo petrol motor, and 1.5L diesel engine. Transmission options will remain the same as well, with a 6-speed MT, 6-speed torque converter, and a 7-speed DCT automatic on offer. In India, the 2022 Kia Seltos Facelift will rival Hyundai Creta, Skoda Kushaq, Volkswagen Taigun, and Toyota Urban Cruiser HyRyder.