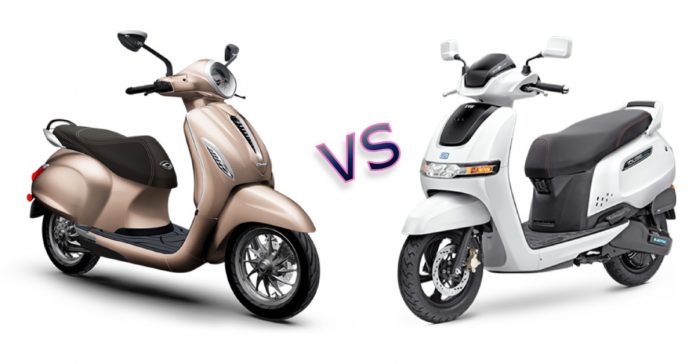 With so many Electric scooters to buy from, here is the comparison of these two competitors.

During 1 year of time, there are multiple electric vehicles launched in the Indian market. It’s very difficult for consumers to choose from. As all the scooters seem really promising. The two most successful Indian companies also released their first electric scooter, which has almost similar specs and competitive prices. iQube being the new kid on the block, Chetak is the name everyone has heard of and has a legacy behind it. This guide will compare each specification of both the E-scooters for you to make the right buying decision.

TVS has released only one variant of the scooter, which is priced at Rs 1.15 lakh ex-showroom. This is the place where Bajaj takes the lead. The company offers Chetak in two variants one is the Urbane and the other being a bigger battery model named Chetak premium. The Urbane has priced at Rs 1 lakh and the premium is slightly higher at Rs 1.15 lakh. Chetak provides more options and flexibility to customers.

The range is a very important topic when it comes to EVs. The TVS iQube is packed with a 4.4kW motor that is directly attached to the rear wheel. It is paired with a 2.2kWH battery, which powers the motor generating a wheel torque of 14Nm. The battery charges 100% with a 5 amp socket in 5 hours. The range of the scooter is 75km in ECO mode as claimed by the company. Although the range will fluctuate depending on which mode the rider is riding. The scooter comes with two riding modes one being eco and the other being power.

On the other hand, Bajaj Chetak is packed with a 4kW motor powered by a 3kWh battery pack. The scooter produces 16 Nm of torque and takes up to 5 hours to get fully charged where 0-80% is claimed within 3.5 hours. Chetak comes with 2 riding modes as well, the first being Eco and the other being sports.

Comparing the top speeds of the scooters iQube can reach up to 78kmph. On the other hand, Chetak is locked at 60kmph. Bajaj claimed that the scooter can do 120kmph as well but is locked due to mileage.

Also Read: OLA S1 VS SIMPLE ONE: WHICH WE THINK CAN WIN THE RACE

Both the electrics come with similar features like smartphone connectivity via Bluetooth and LED light setup with daytime running light only in iQube. Chetak as well as iQube comes with Geo Fencing and Geo Tagging. iQube comes equipped with a TFT touch screen display. Chetak does not have a TFT touch screen, it follows a retro design which appeals to a lot of customers.

Both the scooters are released at an exciting price with similar features. It’s up to customers according to their taste to choose a modern looking scooter that is good for daily use or a retro styled yet featured pack scooter.

Vipul Chandwanihttps://www.motorbridge.com/
Previous article
When should you get your car serviced: A complete walkthrough
Next article
Bajaj Pulsar 250CC spied on yet again