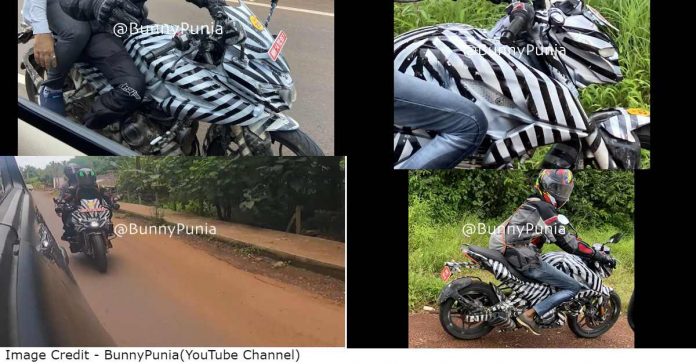 Bajaj is planning to launch a new Pulsar 250cc motorcycle and here is everything we know.

Bajaj has been teasing its 250cc series of motorcycles in the Pulsar and NS segments. Yet again there is another video that looks like a Pulsar 250F and NS250. Bunny Punia an India YouTuber made a video of these bikes and in the video, it can be seen that the bikes look almost production ready. Also with the recent Interview with Mr Rajiv Bajaj, it is expected that these bikes will be released somewhere around Diwali. Although we do not expect all the bikes to be released at once. Here is everything we know about the twins.

Following the long old legacy of the Pulsar 220F, the company really needed to update the old design which didn’t get a major change since a long time. The result of not updating their bikes on time could be seen in their sales as well. Seems like the wait is over, the new design of the expected NS250 looks modern.

There is not much changed in the NS segment but 250F looks brand new with new projector headlamps and daylight running lights (DRLs). The bike has a large fuel tank with fared extension looking more muscular. A stubby exhaust with a metal plate and dual tyre huggers can be seen the same as in the current 200CC segment of Bajaj. A new tail lamp design can also be seen, which looks really stylish and modern. 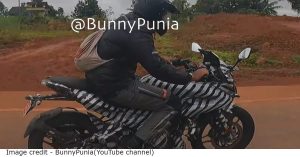 Also rumoured that these bikes will be air-cooled, but we do not expect this to be true as Bajaj’s current flagship bikes get an oil-cooled system for their 200cc range and we could not expect the company to downgrade their new segment. Although the 250F could be seen air-cooled in the pictures, the company may swap it with an oil-cooled unit later. Bikes can be seen with telescopic front forks, mono-shock suspension swingarm at the rear. As a standard feature, it is expected that both the bikes will come with dual ABS.

Very little about the engine is known due to the camouflage, but we can expect an all-new 250cc block producing almost near 24 bhp of maximum power and 20Nm of peak torque competing directly with its sibling Dominar 250, KTM 250cc line up, and Husqvarna which are capable to produce almost 27 bhp of power and 23.5 Nm of torque. For sure the company will add its Variable Valve Actuation(VVT) in its 250F series. In the video, it can be seen that the bike was easily able to cruise along with the car at 120kmph of speed. And yet the rider manages to accelerate away from the car, the new 250cc engine has a lot of punch to offer.

We think it was a good decision by Bajaj to bring its new series with an updated engine to compete against its big rivals. We also expect Bajaj to add a new instrument cluster in its upcoming bikes as the current one has been used for long and looks dated.