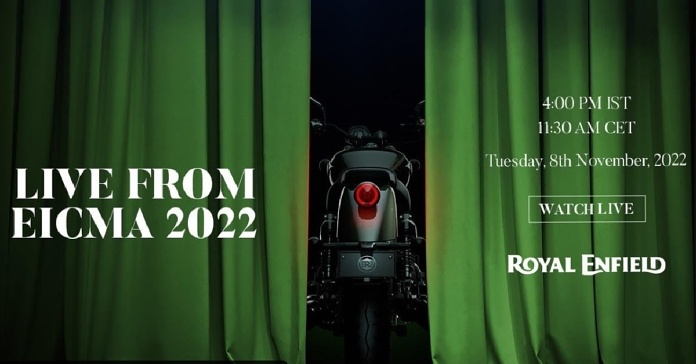 Domestic unveil will take place at Rider Mania in Goa.

Royal Enfield has dropped a teaser image of the rear profile of the Super Meteor 650. In the image, the SM 650 has Pirelli Phantom Sportscom rear tyre, but in the recent spy shots out of Chennai, the motorcycle was seen equipped with CEAT Zoom Cruz tyres. It remains unclear which tyres will be offered in the production model.

The teaser also gives some details regarding the instrumentation of the Royal Enfield Super Meteor 650. It looks very likely that the motorcycle will share its instrumentation with the Meteor 350. This means it will get an analogue speedometer with an interior digital panel for additional trip-related info. There will also be an option to include the Tripper navigation pod. The SM 650 also gets a round tail lamp with LED DRLs along its circumference. It will also come with twin exhausts and split seats.

The Royal Enfield Super Meteor 650 will sit above the Interceptor 650 and Continental 650 in RE’s lineup in India. It will be powered by a 648cc fuel-injected, four-stroke, parallel-twin, air-cooled motor engine that can produce a maximum power of 47hp and 52Nm peak torque. It will also get a 6-speed gearbox and a slip-and-assist clutch.

Certain reports suggest that RE has already started the dealership training for SM 65. The domestic reveal of the Royal Enfield Super Meteor 650 will take place at the Rider Mania festival in Goa, which is scheduled to take place between the 18th and 20th of November. There are reportedly five motorcycles in the pipeline for RE, Super Meteor being the first to get a release. The cruiser is expected to be priced at Rs 3.5 lakh.