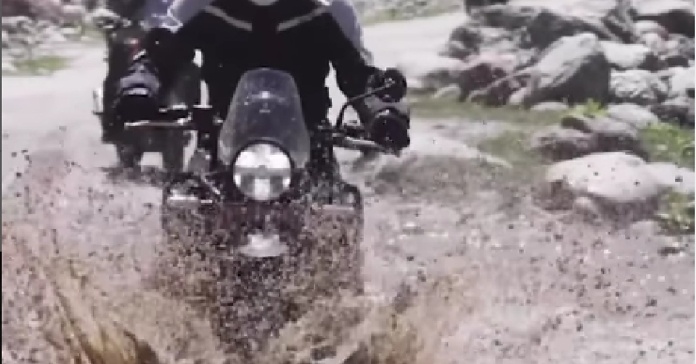 The new Himalayan 450 could make its debut at EICMA in November this year.

Royal Enfield has officially dropped the first teaser for the new Himalayan 450. In the teaser video posted by comp[any on their Instagram handle, the motorbike can be seen crossing a river. The video is captioned ‘Testing 1, 2, 3’, hinting that a new offering may be in the pipeline. The Himalayan 450 is expected to replace the current Himalayan 411 and will retain some of the design elements. The launch is expected to take place next year.

The teaser only reveals the front end of the Himalayan 450, but the motorbike was spotted testing recently. There will be some design tweaks on this new offering, that will differentiate it from its predecessor, the Himalayan 450. The teaser confirms that the Himalayan 450 will come with a new round LED headlamp and newly designed turn indicators.

On top of that, the motorbike will also receive a new windshield, fuel tank, front beak, and exhaust. The seat has been upgraded as well and now comes as step-up split seats. The updated seat also comes with a change in the position of the handlebar and footpegs. The front and rear luggage racks remain the same.

The Himalayan 450 will have the same dimensions as the model it replaces. It will have USD forks at the front and mono-shock suspension at the rear. It will also receive disc brakes, both at the front and the rear, and a dual-channel ABS. Further upgrades to the instrument cluster are also expected.