Royal Enfield is working hard to take over the cruiser segment in India. 2022 Royal Enfield Scram 411 was spotted again being tested on Indian roads. The company planned to introduce a new model of bikes in the coming months and also gave clues of a new 650cc Himalayan on production. One of the bikes in a little affordable region is a stripped-down version of the company’s own Himalayan. The bike will be concentrating more towards road-based tourer, unlike its hardcore adventure-ready sibling.

The test mule of the same has been spotted on multiple occasions and yet again the bike was spotted by an automotive enthusiast. The Scram 411 this time was spotted with an almost undisguised production-ready avatar. Earlier there was major camouflage over the bike making it difficult to guess the design, but not this time. As by the spy shots, we can clearly tell that the bike is majorly inspired by its own adventurous sibling, the Himalayan.

The previous spied model had extra panels over the body but this one has shed now making the bike look leaner. The bolder exoskeleton of Himalayan has been replaced with tank shrouds on the new bike. The height of the Scram has also been reduced with a 19-inch front wheel as compared to the 21-inch in its adventure-ready sibling. A single piece grab rail is used in replacement of the luggage rack mount. The tyres used in the bike are still wired spoked and dual-purpose ones. 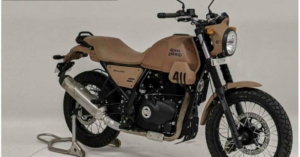 The tail section also receives a revamp with new tail lamps and turn indicators. The headlamp mask looks repositioned with turn indicators with revised front and rear mudguards. Also, the bike does not have a pointed front and tall windscreen which can be seen on Himalayan. Though the upswept exhaust and split seat with the taller rear can be seen carried forward.

Powering the bike4 will be the same 411cc single-cylinder air-cooled SOHC engine that powers up Himalayan as well. The same produces 24.3 bhp of max power and 32 Nm of peak torque and is mated to a 5-speed gearbox. The engine will be slightly retuned accordingly for comfortable road rides. The instrument cluster will be a new one with a small navigation pod accessory. The suspension setup will be the same with slightly different tunes for road friendliness.