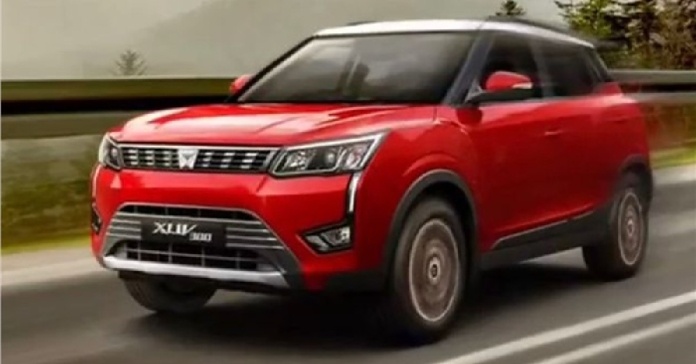 After long periods of delay, the Mahindra XUV300 has been officially teased for the first time.

Mahindra has finally dropped the first teaser reveal of the facelift model of its midsize SUV, Mahindra XUV300. The SUV will receive cosmetic upgrades along the exterior as well as a new engine. This new facelift version of the XUV300 will also receive the Mahindra ‘Twin Peaks’ logo. We may see the official launch early next year.

Changes to the exterior of the Mahindra XUV300 facelift are minimal but noticeable. The Mahindra ‘Twin Peaks’ logo finds its way to the centre of the rectangular front grille that has been reprofiled for the facelift. Minor changes are noticeable on the front bumper as well. The side profile carries the same look as the outgoing model, except for the new 17-inch dual-tone alloy wheels. The rear end remains unchanged as well.

Inside, the Mahindra XUV300 facelift gets a new dashboard design along with black interiors with red stitching. The new infotainment touchscreen could be sourced from the XUV700. This infotainment system will offer car tech like Android Auto, Apple CarPlay, Bluesense Plus, smartwatch connectivity, tyre pressure monitors, and parking sensors. Mahindra could also launch a new variant under the label of XUV300 Sportz.

Under the hood, the XUV300 facelift gets some significant upgrades. The T-GDI branding confirms the 1.2-litre 3-cylinder mStallion direct-injection turbo-petrol engine. This engine produces a maximum power of 131hp and 230Nm torque and will come mated to a 6-speed manual gearbox. The facelift will also be offered in the current 1.2-litre turbo petrol and 1.5-litre diesel engine options.

The launch date of the XUV300 facelift has not been made official yet, but reports suggest that it could hit the roads as soon as March 2023. Upon launch, the Mahindra XUV300 will rival Maruti Brezza, Hyundai Venue facelift, Kia Sonet, Tata Nexon, Renault Kiger, and Nissan Magnite.