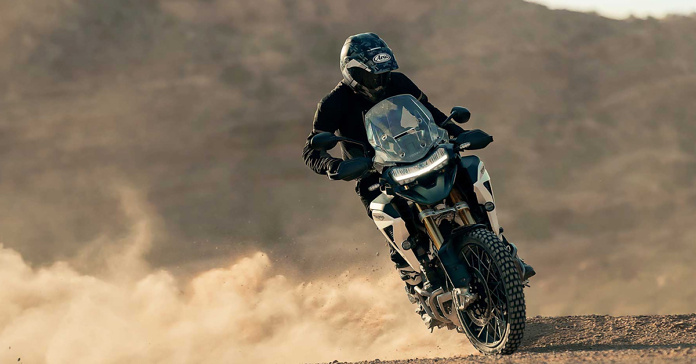 The new Triumph Tiger 1200 comes with a series of upliftments on almost all its fronts.

The 2022 Tiger 1200 comes as Triumph’s flagship adventure tourer and will be seen locking horns with the BMW R1250 GS, Ducati Multistrada V4, and Harley Davidson Pan America. After the all-new Tiger 1200 gets appended to the Triumph Tiger lineup, the Tiger range would then comprise 9 models in total. These include Tiger Sport 660, Tiger 850 Sport, Tiger 900 GT, Tiger 1200 GT Pro, and more.

The 2022 Triumph Tiger 1200 ADV comes with major upgrades on almost all its fronts, including the engine, chassis, and platform. It gets powered by an all-new 1,160cc inline T-plane triple engine. It delivers 150PS power at 9,000rpm and 130Nm of torque at 7,000rpm. The engine is coupled with a 6-speed transmission unit.

Read also: 2022 KTM 390 ADVENTURE OFFICIALLY LAUNCHED IN INDIA: EVERYTHING YOU NEED TO KNOW

On the front of technical equipment, the 2022 Triumph Tiger 1200 comes with several unique features that have been considered its key highlights. It includes a Blind Spot Radar System as well as a Lane Change Warning System. Moreover, the bike also comes equipped with a 7-inch TFT instrument cluster display with an integrated My Triumph connectivity system, Bluetooth connectivity, six driving modes, hill hold assist, cruise control, heated grips, and keyless operation. To add to this list, the 2022 Tiger 1200 comes with TPMS as well as heated rider and pillion seats.