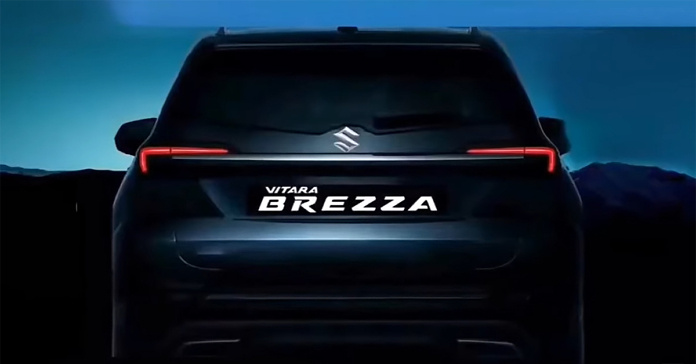 The latest images of the facelifted Brezza fully reveal its exterior styling and features.

The new 2022 Maruti Brezza has been spied upon yet again in the country. The upcoming facelift version of the compact SUV, which is scheduled for launch at the end of the next month, was spotted undisguised during its TVC shoot in Gurugram recently. Spy shots of the vehicle have been doing rounds on the internet for quite a while now. The latest images fully reveal the exterior design of the vehicle.

The facelifted SUV will reportedly come with significant upliftments in its exterior design. Earlier, only the front profile of the vehicle had been disclosed from its spy shots leaked online. The recent images now reveal the looks of its rear profile as well. From the front, it features a new fender along with a new bonnet. The front grille is flanked by sleek dual-LED projector headlamps with integrated C-shaped LED DRLs. The new headlamps merge well with the grille. Moreover, the front bumper also looks more muscular than its previous model and features a silver faux skid plate below it.

At the back, the 2022 Brezza gets slimmer taillights that extend onto the tailgate. The rear bumper comes restyled, is finished in black, and also gets a silver faux skid plate like the front one.

Coming to the 2022 Maruti Brezza interiors, a completely overhauled cabin is expected with the new car. It is expected to feature a new dashboard, a freestanding touchscreen infotainment system display, paddle shifters for automatic variants, redesigned front seats as well as a sunroof. Adding to this list, the new Brezza facelift also comes with wireless Android Auto and Apple CarPlay connectivity, a 360-degree camera, Suzuki Connect car tech, and more. On the front of safety, the vehicle is expected to come with six airbags, TPMS, hill descent control, hill hold assist as well as other ADAS features.

Elaborating upon the 2022 Maruti Brezza specs, it will get powered by a 1.5L K15C naturally aspirated petrol engine. The engine is expected to deliver an output of about 103bhp and 137Nm of peak torque. This will be coupled with a 5-speed manual or a 6-speed torque converter automatic transmission, instead of the 4-speed unit seen in its predecessor. The SUV is also expected to come with a mild-hybrid tech which would offer an auto start/stop function.

The 2022 Maruti Brezza launch in India is expected to take place sometime at the end of June 2022. Post its launch, the SUV will be seen locking horns with the 2022 Hyundai Venue, Nissan Magnite, Kia Sonet, Renault Kiger, and more.