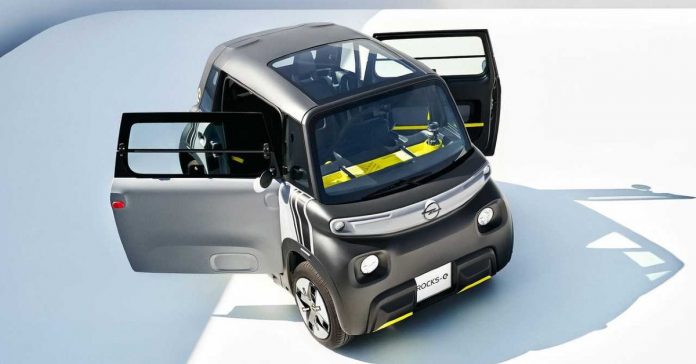 The rebadged Citroen Ami, Rocks-e a tiny electric vehicle was released in Germany.

There are a total of two cars positioned below the Corsa supermini by Opel. The Rocks-e is the shortest vehicle offered by Opel. Technically it’s not a brand new car offered by the company. It looks like the car has been taken from French manufacturer Citroën and has been rebranded. Just like the Ami as per European Union classification is not listed as a car but rather a quadricycle. Here are the changes and specifications of the car or quadricycle offered by Opel.

The vehicle has space for two people sitting comfortably and with the dimensions of 2,410 mm long and 1,390 mm wide, it can fit any garage very easily. Car quadricycle weighs just around 471 Kg including the battery. According to European Union classification, a car must be below 425 kg excluding batteries to be listed as a quadricycle. The Opel Rocks-e has 14-inch wheels which help this mini vehicle’s turning radius to be only 7.20m. The quadricycle is ideal for city rides and can easily make it through tight corners. Even with the small form factor company offers its customer a 63-litre boot space to keep small items.

Powering the vehicle is a 5.5 kWh battery which can be fully charged in just 3.5 hours from any household charging socket. The escort is providing a three-metre long charging cable that is permanently housed in the SUM and can be simply pulled out of the passenger door when needed to charge the vehicle. Opel offers an adapter as a standard for charging at a public charging station as well. With the small form factor, The Opel Rocks-e offers a range of 75 kilometres according to WLTP2, which is ideal for day to day commutes and small city rides. 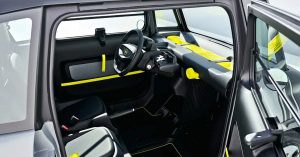 The maximum speed that the vehicle can achieve is 45 kmph. Just like its size, the cockpit holds a simple and small display that shows speed, driving mode (Drive, Neutral, Reverse), battery state of charge, remaining range and mileage at a glance. The interior also has a mobile holder to place your smartphone which can come in handy for navigation.

Opel is trying hard to open up the electric vehicle segment to everyone and in every segment. It will initially go on sale this fall in Germany where customers have the option to buy the quadricycle online or from selective dealers. It can be legally driven in Europe from the age of 15 and is ideal for beginners.