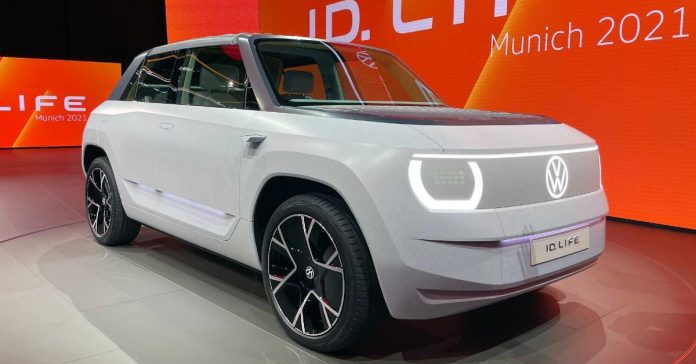 Volkswagen showed its entry-level electric vehicle at IAA Munich today. Even if the concept looks production-ready the car won’t come out of the factory till late 2025, when it will be slotted under ID 3 compact electric vehicles. The concept is said to be front-wheel drive, unlike its bigger brother, which is a rear-wheel-drive EV and will be based on the same MEB platform shortened for specific city rides.

The motor has a respectable punch delivering 231 hp and 290 Nm torque on the front wheel. The concept is expected to reach 0-100km/h in just 6.2 seconds and maxes out at 180km/h. The battery pack of ID. Life powers the motors with a 57 kWh battery that can take the car approx 400km(the range is based on the WLTP cycle). The company in the showcase even claimed that the car will support fast charging using DC and can charge it for 163 km in just 10 minutes.

ID life is quite high with 190 millimetres of ground clearance. Talking about the dimensions, the car is remarkably spacious and practical despite its small form factor. The EV is 4,091 mm in length, 1,845mm in width and 1,599 mm in height. Volkswagen provided excellent cargo capacity with a 1,285-litre boot capacity. The rear storage compartment alone can accommodate 225 litres of cargo, adding to it is an extra 108 litres under the load floor. The company’s engineers have also created a 68-litre storage area in the front area where there’s yet another space with a volume of approximately 8 litres to store the charging cable. 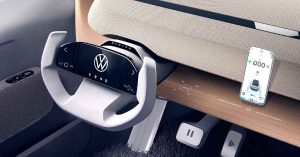 We found out the company has removed all the mirrors and replaced them with cameras, which look futuristic. The interior holds a 9-inch infotainment system and is fitted with a retractable projection screen complemented by a gaming console, which we are fairly certain won’t be there on the 2025 production car. The steering wheel of the car looks much like an aeroplane and has a neat white finish.

VW has made the car from recyclable material. Though it’s not the first time the company has showcased such a vehicle, it’s interesting to see that the company is focusing on going completely green. They not only settled with just emissions but also towards the build of cars as well.

The concept of the entry-level electric car looks nice and consumers should eagerly wait for this upcoming offering by Volkswagen. The price of the car and launch date in India is not revealed by the company yet but have been announced for Germany. The EV will start from €20,000(Rs 17,34,160 approx) and the fully loaded version is going to cost €25,000(Rs 21,67,997 approx) with booking to open in 2025.