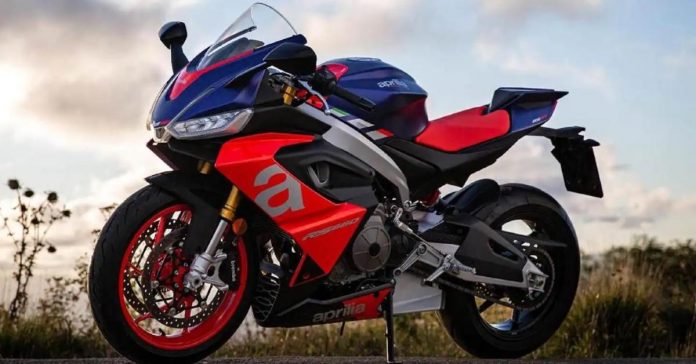 Aprilia RS 660 arrives at dealerships ahead of its launch

The company is going to launch its mid-segment superbike Aprilia RS 660 soon in India.

Aprilia is new to the Indian market and yet a very popular in India. The company is known to build race-ready performance bikes and scooters. The bike has already launched in the international market and looks beautiful and track-ready with a powerful engine. The bike is gonna soon launch in Indian markets and was spotted in showrooms ahead of its launch. Here are the details we know about the bike yet.

We can expect that the Aprilia RS 660 will share all the features and design of the international variant produced by the company. The bike comes with an underbelly exhaust, and a Muscular tank that tucks you in properly, raised windshield, 41 mm inverted golden coloured front forks and a mono-shock in the rear. Aprilia has taken good care of the safety by pairing the bike with 3 level cornering ABS, engine brake control, adjustable wheelie control and traction control as standard features. The company also paired the bike with five riding modes with the bike that includes Commute, Dynamic, Individual, Challenge and a track-ready Time Attack.

The bike has a full LED setup for lights in front and tail including the turn signals. A multifunctional colour TFT instrumental will show all the information about the bike. Aprilia RS660 will be available in 3 colours: Lava Red, Black Apex and Acid gold. Paired designer signature orange coloured wheels.

The race machine is powered by a 659cc parallel-twin liquid-cooled engine that produces 101 hp of power at 10,500 rpm and 67Nm of peak torque at 8,500rpm. The engine is equipped with a 6-speed gearbox and bidirectional quick-shifter, which will make the downshifts and upshifts hassle-free. The bike is priced at around Rs 14.00 Lakh ex-showroom and will give direct rivalry to its track-ready competitors like Honda CBR 650R and Kawasaki Ninja 650.

It is good to see that international companies like Aprilia are taking an interest in the Indian market and bringing up their high-end sport segment bikes. The unit will be imported as CBU(Completely Built Unit). It is also rumoured that the company may pair this bike with Tuono 660, which is the semi faired version of the same bike.