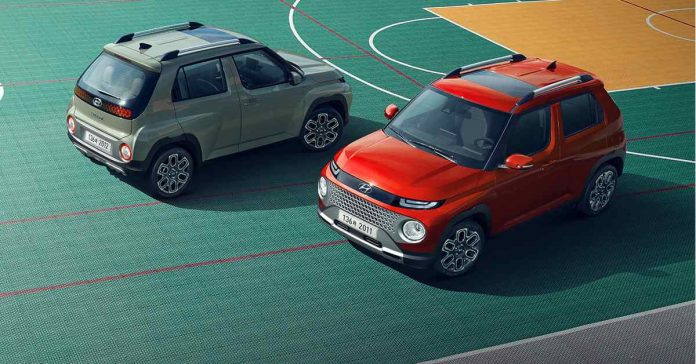 Hyundai Casper was released in an online event in the global market. Here is everything we know.

Hyundai is known to build good cars and is a reputed car manufacturer in India. The Casper code-named AX1 has been spotted quite often in its camouflaged version. Now after making an online debut we can confirm that the micro SUV will start production in September followed by its first launch in South Korea. Here is the specification of the International variant we know.

The South Korean carmaker Hyundai will offer Casper in two variants the first will be 1.0-litre petrol naturally aspirated mill and the other option will be the turbocharged variant of the same engine. The engine is a three-cylinder that will produce up to 76 hp and will be paired with a 4-speed automatic transmission unit. The turbocharged variant of the engine can be a three-cylinder GDi unit that can generate up to 100 bhp and pair with a 4-speed automatic transmission as well.

Looking at the above specification, we can expect that the car in India will probably use a 1.1 litre NA petrol engine that is used in the current generation Santro. The engine churns out 69 hp of power and 99 Nm of peak torque. It is possible that Hyundai may release a turbocharged variant of the same being 1.0-litre turbocharged petrol. It is even possible that Hyundai may release the higher trims with a 1.2-litre naturally aspirated engine used in Venue, i20 and i10 Nios. The unit is capable of producing 82 hp of maximum power and 113 Nm of peak torque. The car will be available in both 5-speed manual as well as 5-speed automatic transmission. 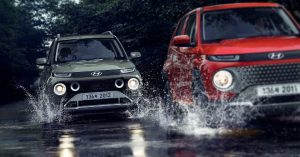 Read Also: APRILIA RS 660 ARRIVES AT DEALERSHIPS AHEAD OF ITS LAUNCH

The Korean media has released the dimensions of the car ahead as well. The micro crossover will be 3,595mm in length, 1,595mm in width, and 1,575mm in height which will make it the smallest SUV car Hyundai offers in India. The weight of the production-ready car is not known yet.

Talking about the features, it will have all the latest technology offered by Hyundai in all its cars. Even the exact details are unknown; some easy guesses can be an 8-inch touchscreen infotainment system with the support of Apple Carplay and Android Auto. For higher trims, we can expect features like keyless entry, multi-information display, automatic climate control, push start/stop button.

The car seems very interesting and will be loved by a lot of car enthusiasts and customers in India. Though the car will be released in India next year it will be interesting to know what the company has to offer and at what price tag. The car will give direct competition to Tata punch and Maruti Suzuki Ignis.

Vipul Chandwanihttps://www.motorbridge.com/
Previous article
Aprilia RS 660 arrives at dealerships ahead of its launch
Next article
JBL announces its new aftermarket car audio solutions with CLUB 605 CSQ and Celebrity 100 in India