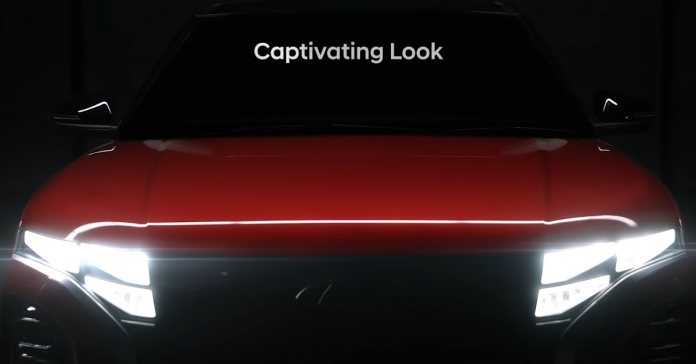 A teaser for the new Hyundai Creta 2022 facelift was uploaded on the company’s social media.

The new 2022 Creta facelift was to be introduced by the company in GIIAS 2021 and now Hyundai has already teased the car on its social media. The Hyundai Creta is one of the most selling SUVs in the Indian market. Some variants even have months of waiting time.  Even after the sales figure of the current-gen is increasing day by day and many consumers are waiting for their delivery. The company already teased its next generation for the international market.

The test mule of the facelift was spotted on multiple occasions testing on international roads. From the spy shots, we expected that the frontal look of the car is close to the company’s own Tucson/Santa Cruz. And after the teased video that assumption is confirmed as the new headlights look identical. The new headlights include a rectangular unit that seamlessly merges to the new front parametric grill going all the way down to the bumper.

We can also sport new split tail lights and even more elements that have been taken directly from Hyundai Tucson. There will be no structural change to the chassis is expected though the 2022 Creta facelift will get new alloy wheels. The facelift teased video shows some important aspects of the car which focused basically showing the interior and exterior of the car with some add on features.

There will be lots of add on features as we can see in the video which will make this gen stand out of the current-gen model. The 2022 next-gen Cresta gets a fully digital instrument cluster with UI adaptability according to the mode you are driving in. The Bose premium speakers and panoramic sunroof remain the same as offered.

Users can now start/stop the car remotely with Hyundai’s BlueLink application. Hyundai has entered the car market with smart features by adding ADAS in its new Creta. Though it will be a tough competition as the rival MG Astor already sports level 2 ADAS.

The same is expected to get Lane Drive-Assist functionality as well that uses camera and sensors on the car to keep the car running in the centre of the lane. The engine option as per the Indonesian market will be the same 1.5-litre petrol motor. The car will also be available in a Diesel variant and a turbo petrol variant in the Indian market.

The power figures of the car cannot be expected as of now but there is a possibility that the company may have tweaked the engine a little to produce more power. A similar update can be seen on Hyundai Alkazar as well but an official announcement by the company has not been made yet.