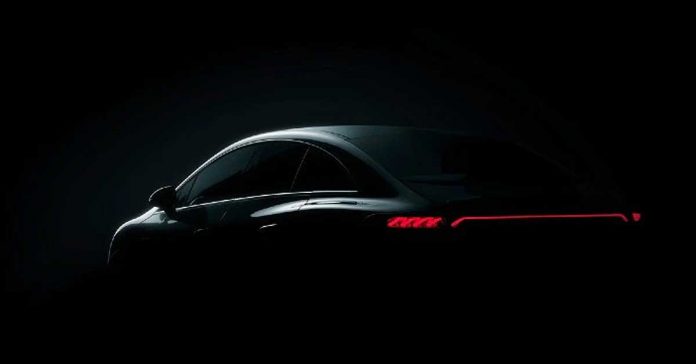 Another EV will soon hit the roads.

Mercedes is a luxury car manufacturer that has built a great reputation around the world. No matter which country you go to, most people strive to own a merc. With that, they have teased an electronic vehicle, which will lie in the E-class category of its fleet. The teaser comes right before Munich Motor Show 2021 and chances are that the car will launch at the auto show in Germany.

Also known as the Mercedes EQE (Electric E-class) this car will be on the same Mercedes terrain seen in other classes such EQS by the company. The car company has put out a few teaser images of the car, which tell a lot about it. For starters, the basic design of the EQE will be inspired by the current E-class. However, there will be subtle yet modern changes to it, like the rear brake lamps and lights. It is going to be a four door with a large boot model, which should also have extra storage space in the front under the bonnet since the car is battery powered and there is no combustion engine inside.

The cabin and interiors look very similar to the EQS on this road machine. There would be an over 54-inch hyper-screen dashboard plus ICE (in-car entertainment) setup running across the front stitching multiple screens into one. That will also have all the cabin controls such as the air conditioner on it. The steering wheel comes with its own set of pushbuttons to control things such as the audio unit and other driver dash facilities. The seats on the driver as well as passenger side will be electronically managed, somewhat like the current E-class.

The centre console also looks radical as a blue night light engulfs the whole cabin space. The steering wheel will also sport the Mercedes badge on it and seems like premium leather has been slapped onto it giving it a richer feel. The same can be said of the centre armrest. The tech specs are still under tight wraps with certain leaks coming into play over the last few weeks. The Mercedes EQE should have a range of over 700Km with fast charging capabilities. All of it will be released at the Munich Motor Show to be held in September 2021.

Motor Bridge Bureauhttp://www.motorbridge.com/
Previous article
New Bajaj Pulsar 250F to launch soon: Here is what we know so far that excites us
Next article
The new Mahindra XUV700 leaked in images: Reminds us of Honda CRV from certain angles