Will the bike be named Hunter, Roadster or Super Meteor? We will finally get to know next month

A new J platform was introduced by Royal Enfield with Meteor 350. Now there is news that the Royal Enfield 650cc cruiser will be named Super Meteor. Earlier, there were 2 names that we know for the same bike which were, Hunter and Roadster. The Chennai based plant is working on many new models and bikes, which are being spied quite often. Among the list is the new 650cc cruiser which has been spotted testing on roads on multiple occasions.

Royal Enfield also planned to put its foot on the international market by introducing its 650cc engine to the globe. We can speculate that along with the engine the company will also showcase its new 650cc cruiser. The engine has quite a fame in the Indian market as it has been used in both Interceptor 650 and continental GT 650.

With this, we can easily guess that the company will use the huge stage and spotlight on the 2021 EICMA show in Milan by showcasing its new 650cc cruiser expected to be named Super Meteor. The annual EICMA show is scheduled between 25-28 November. The company is not new to the name Super Meteor as it has previously used this name in the USA back in the 1950s. We can see the reason behind why this name has started to surface over the internet. 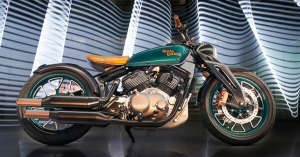 After the launch, the bike is expected to become the most expensive bike that the bike manufacturer makes. We can anticipate that its inspiration was taken from the 838 cc KX bobber which they displayed in the 2018 EICMA show. For now, Super Meteor will be powered by the company’s 650cc parallel twin-cylinder oiled cooled engine capable of producing 47 PS maximum power and 52 Nm of peak torque, The same is paired with a six-speed transmission with slipper and assist clutch as standard.

The bike will sport all the latest features like RE’s first USD front forks, semi-digital instrument control powered by Google Tripper Navigation and dual-channel ABS with front and back disk brakes. Other highlights will be an upright handlebar, teardrop-shaped fuel tank, twin rear shocks, black alloy wheels and forward-set footpegs. Further details of the bike are still under wraps by the company but a 650cc cruiser will be a perfect addition to its fleet.