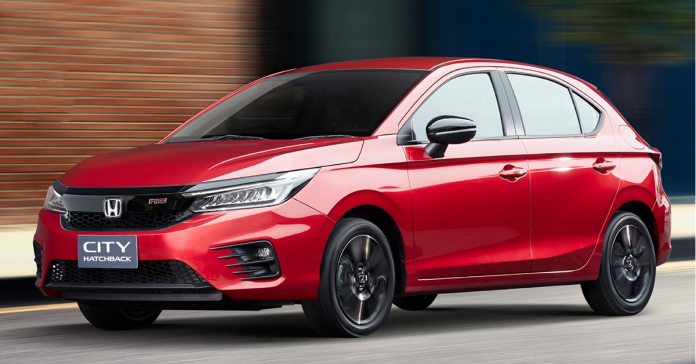 After being successfully launched in Thailand, the 2021 Honda City hatchback is now released in Malaysia as well and will replace Honda Jazz. Apart from some aesthetic changes, the Malaysian version is identical to its Thailand counterpart. The company released the car in four variants S+, SV and top-spec RS. The last trim is a sports hybrid e:HEV model. Below are the rest of the details of this new car.

The platform of the new Honda City hatchback is shared with its sedan sibling. The looks of the car remain similar except when we see the top specked RS variant. The sporty hatch gets a glossy black grille shaped in honeycomb, new LED headlamps, daytime running DRLs and updated aggressive fog lamps. The rearview mirrors are all blacked out with integrated turn signals. Adding to the sportiness are big 16 inch alloys coloured in all black enhancing the visual appearance.

The rear bumper gets a black tint with edgy LED taillights. For a sporty contrast, the RS also gets an all-black interior paired with red stitching in upholstery. Talking about the features, the City hatchback has the same 8-inch touchscreen infotainment system with support for Apple CarPlay and Android Auto. Just like competitors, the rear seat of the hatch is completely foldable which can be used on multiple occasions. 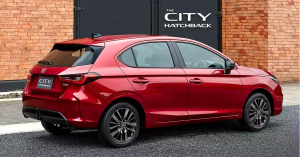 The Japanese company has powered the car with a 1.0-litre VTEC turbo petrol motor. It is capable of producing 122 ps of max power at 5,500 rpm and 173 Nm of peak torque at 2,000-4,500 rpm. Paired with CVT automatic and no manual for enthusiasts. The mild-hybrid e:HEV offers a better torque of 252 Nm and is more smooth, fast and efficient than its only petrol mill version. For safety purposes, Honda fitted the hatch with 4 airbags, ABS with EBD vehicle stability control, hill start assist, emergency stop signal, and a multi-angle rearview camera.

The price of the car is kept at starting at THB 599k (Rs 14.6 Lakh approx). It’s doubtful that the company will launch this car in India, as Jazz is a lot cheaper than this car but still doesn’t have great sales figures. A less powerful version with the same body, replacing Jazz can be a possibility. If this scenario is true the car will compete against premium hatchbacks in India like Hyundai i20, Maruti Baleno and Tata Altroz.