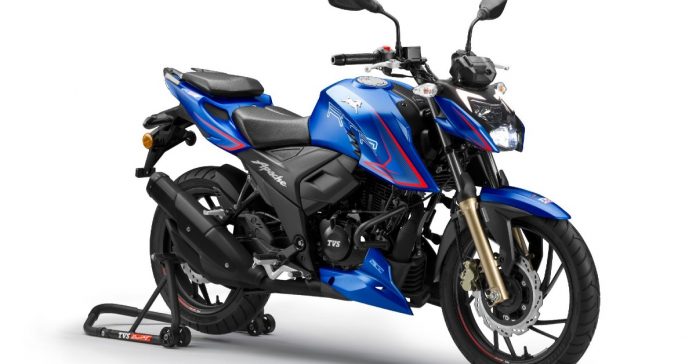 After teasing for months TVS has finally released its Apache RTR 200 4V in Nepal. Here is everything we know.

TVS Motor Company has just launched the new TVS Apache RTR 200 4V ABS in our neighbouring country. Jagdamba Motors are the exclusive importers of TVS products in Nepal. This version looks similar to the Indian version except for the BS-6 engine. Apache RTR 200 4V ABS has been priced at a premium of Rs 3.41 lakh in Nepal. The prices are higher due to the taxation system of the country.

The Nepal bike gets a BS-IV emission mill instead of a BS-VI one. Apache RTR 200 4V is powered by a 197.75cc, single-cylinder, oil-cooled engine. This motor churns out 20.5 PS of power at 8,500 RPM and 18.1 Nm of torque at 7,000 RPM. The engine is paired with a 5-speed manual gearbox. There is no fuel injected model in the country yet and the bike will be available in carburettor variant only. It will be packed with features like ABS(single-channel), TVS’ (A-RT) Race-Tuned Slipper Clutch and a feather-touch start system.

The new TVS Apache RTR 200 4V motorcycle is engineered with three ride modes: Sport, Urban, and Rain. This system will enable riders to shift between ride modes, using the ride mode switch on the handlebar. The bike will act according to the power output and ABS to the ride mode one is driving in. 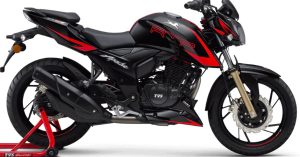 The Apache 200 4V gets Showa adjustable telescopic forks at the front and a mono-shock absorber at the rear to give the rider a sportier feel and make the bike track-ready. The instrument cluster of the bike has also got tons of information to display to the rider. Also holds the TVS SmartXonnet feature which connects your smartphone directly to the instrument cluster. With this feature, one can see the turn by turn navigation along with call notifications directly on the instrument cluster.

TVS has taken a bold move to release its updated TVS Apache 200 4V version in Nepal as the sales of the company is pretty good and there are a lot of TVS fans in the country as well. With the new LED DRLs and new graphic design, the bike will surely attract a lot of new customers. The bike will be available in three colours: Gloss Black, Pearl White, and the newly launched Matte Blue inspired by the TVS OMC race bike.