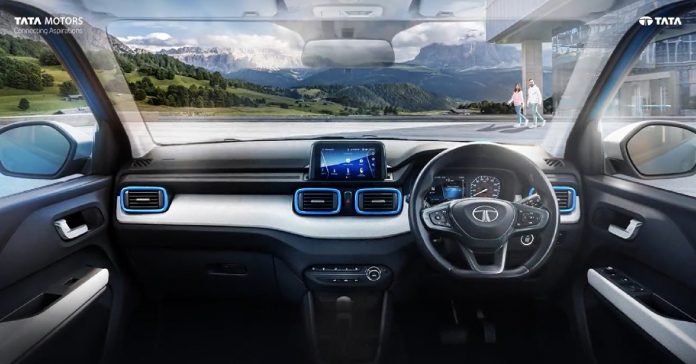 Tata Punch interiors have been revealed before its launch

Tata Punch’s interior was showcased before its launch. Here is what we can expect.

Tata Motors will soon launch its new smallest SUV in India during the festival season. After breaking the covers last month, the Tata Punch interior have been revealed before its launch. With these leaks, we can get an idea of some more details related to the car ahead of its launch. The SUV will be placed below Tata Nexon in the company’s SUV portfolio. After the release, it will compete directly against Maruti Suzuki Ignis, Renault Kiger, and Nissan Magnate in India.

On the first look at the interior, we can see that the company has shown a minimalistic approach. The upcoming SUV has a dual-tone interior with blue bezels surrounding the AC vents. A 7-inch touch screen that can be seen in Tata Altroz. Thus we can expect the infotainment system to be tuned by Harman Kardon with capabilities of Android Auto and Apple Carplay. The top-spec variant is expected to get a wireless charger as well.

The steering wheel is a flat bottom that is taken from its elder sibling Tata Nexon. In the images, we can see an AMT gearbox concluding that the car will be available in an automatic variant as well. The rest of the features on the Tata Punch include a semi-digital instrument cluster, automatic climate control, power windows for the front passengers, engine start-stop button, electrically adjustable ORVMs, and silver accents on the door handles running on the door too. 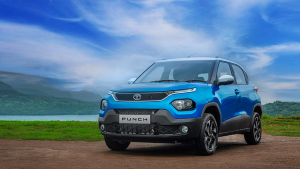 The exterior of the car was already revealed by the company with a dual colour paint scheme on offer. Some of the design features include split headlamps, tri-arrow grille, and rounder tail lamps. The Punch sits on a large 16-inch alloy giving it a wheelbase of 2,450mm. Apart from this Tata Punch also features black cladding on the side, squared wheel arches and a higher window line.

Tata’s smallest SUV measures 3,840mm long, 1,822mm wide, 1,635mm tall, The micro SUV is powered by a 1.2-litre naturally aspirated unit and a 1.2-litre turbocharged unit. The transmission after the interior reveal can confirm that the car will be available in both manual and automatic gearbox options. The expected price of Tata Punch is between 5lakhs to 10 Lakhs ex-showroom India.