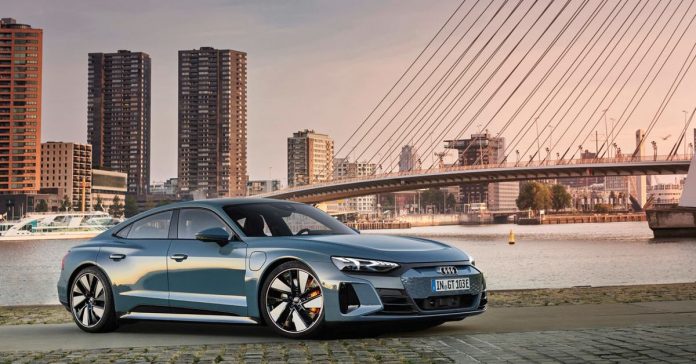 With the company advancing to the electric vehicle segment. German luxury carmaker Audi launched its Audi e-tron GT and the Audi RS e-tron GT in India today. The specifications of cars look promising and it was a good move by the company in the electrification era. Here are all the details of the cars.

Audi has been selling its e-tron variant since its launch in India on July 2021. The Audi e-tron 50 is selling at Rs 99.99 lakh along with Audi e-tron 55 at Rs 1.16 crore and Audi e-tron Sportback 55 at Rs 1.18 crore. Adding in this segment, the new cars being Audi e-tron GT has a price tag of Rs 1.80 crore along with the Audi RS e-tron GT priced at Rs 2.05 crore. All the prices above are ex-showroom India.

Both cars are fully electric sports cars. The Audi e-tron GT and the Audi RS e-tron GT are equipped with two electric motors, one on each axle. Both the motors in the e-tron GT combined produce 530hp of maximum power and 630 Nm of peak torque. It can do a 0-100kmph run in just 4.1 seconds with a top speed of 245kmph.

The faster RS series produces 646hp of maximum power and 830 Nm of peak torque. It can complete 0-100kmph in 3.3 seconds with a top speed of 250kmph. All four wheels get even power as the cars are fitted with Quattro all-wheel-drive while the RS e-tron GT uses an electronically controlled differential lock on the rear axle.

Talking about the battery both the cars have the same 93.4kWh lithium-ion battery. The claimed range for the e-tron GT is 388-500km (WLTP cycle) while for the more powerful  RS e-tron GT, it is 401-481km (WLTP cycle). One can charge the cars in both AC and DC. With a 270kW DC charger, the battery can be charged up from 5 to 80 per cent in approximately 22 minutes while the 22W AC charger takes 5 hours 15 minutes from 5 to 80 percent.

The company will provide the ‘Chargers Near Me’ section of the ‘myAudi Connect’ app to fulfil the charging needs. Along with this, the 2021 buyers will get a complimentary wall box 11kW standard charger. The key Audi India dealership will be equipped with 50kW fast chargers for their customers. 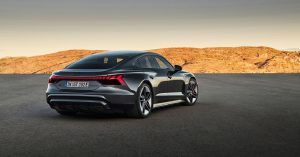 Both Audi e-tron GT and the Audi RS e-tron GT will get Matrix LED headlights as standard but one can choose Audi laser lights as an option. The cars sit on 20-inch 5-spoke alloy wheels and have a sloping roofline. A fixed panoramic glass roof comes as a standard feature.

The customers do have an option to upgrade it to a carbon roof. There are nine exterior colour options in all being Ibis White, Ascari Blue, Daytona Grey, Floret Silver, Kemora Grey, Mythos Black, Suzuka Grey, Tactics Green and Tango Red.

The interior of both siblings is inspired by the “monoposto” concept with a strong focus on the driver. The instrument cluster is a large 12.3-inch panel with the Audi Virtual Cockpit and 10.1-inch touchscreen MMI are standard in both cars.

Among the many standard features are 16 speakers of 710-watt paired with an Olufsen sound system, an air ionizer, lane departure warning system, cruise control, and comfort key with gesture-based boot lid operation.

Vipul Chandwanihttps://www.motorbridge.com/
Previous article
Yamaha Aerox 155 maxi-scooter launched in India at Rs 1,29,000
Next article
Tata Punch interiors have been revealed before its launch