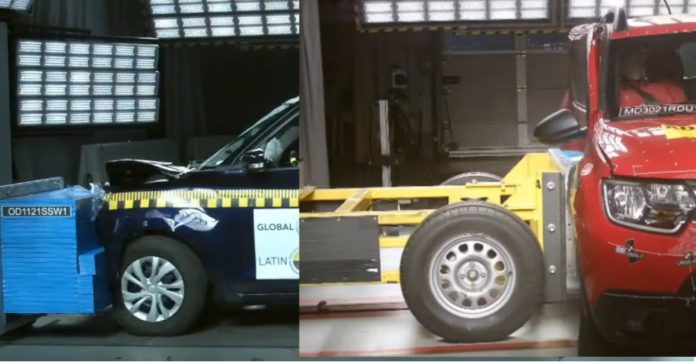 While these cars are very popular in India, they scored 0 Star Safety Rating at Latin NCAP raising a lot of questions.

Suzuki and Renault have been there in the Indian market for a long time now. The sales figures of both Swift and Duster are always good in the country as well. Yesterday, tests were conducted on both cars by Latin NCAP, the South American associates of Global NCAP. Neither of the cars scored any stars in the overall result, which raises a lot of questions. Below were the Observations of the test.

The made in India  Suzuki Swift was equipped with two airbags as standard. The car performed very poorly in all the safety tests conducted on it. It scored 15.53% in the adult occupant box, 66.07% in Pedestrian Protection and Vulnerability Road User box was fairly better. For the child Occupant box test, the company declined to provide NCAP with child seats and scored 0%. NCAP used the standard child seats as it was required for the test. Swift scored 6.98% in the Safety Assist box. In the Side impact test, it was observed that the door opening was not distinct and had no head protection due to the absence of side airbags. 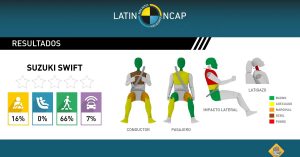 Talking about the Renault Duster, the company issued a dual airbag model To Latin NCAP and ESC as standard. The SUV performed significantly better than swift yet had poor performance with 29.47% in the Adult Occupant box, 50.79% in Pedestrian Protection, 22.93% in the Child Occupant box and Vulnerable Road Users box and 34.88% in the Safety Assist box. In the Side Crash test, it was shocking to see that the structural body of the Duster got bent and even the door opened. Same as the Swift, Renault didn’t provide head safety with side airbags. The NCAP also claimed that the duster showed signs of unstable structure. 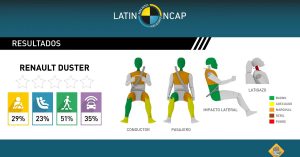 What can be done

Both the cars are very popular in India if we see the sales figures. During the Global NCAP test, the Maruti Suzuki Swift received two stars back in 2018. After seeing the test results it’s really alarming for the company as well as Indian consumers to trust these brands. Safety is a really important aspect of the automobile industry. It is really important for the government to now impose a Euro standard of safety for Indian Car manufacturers as well. As we can clearly see, the Swift model sold in Europe comes with 6 airbags and Electronic Stability Control(ESC).

Vipul Chandwanihttps://www.motorbridge.com/
Previous article
Tata Punch Vs Maruti Ignis: Here is what we think
Next article
New Yamaha R15M spotted in showrooms ahead of its launch