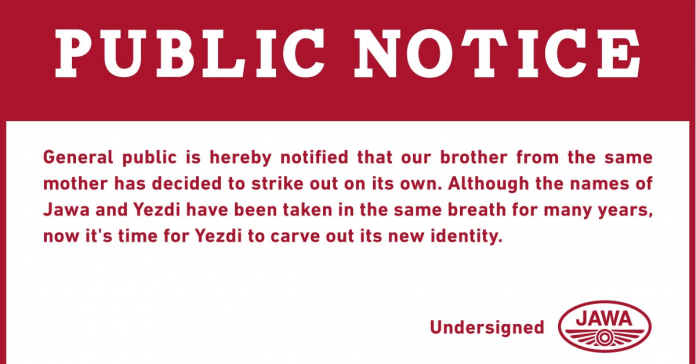 Yezdi official teaser shared by JAWA motorcycles on their socials

With the official trailer, we can anticipate the bikes are coming to the market anytime soon.

After the official tweet by Jawa motorcycles, the company released Yezdi official teaser on their socials and the vintage bike enthusiasts can’t keep calm. Yezdi is a name that has been in the market for years, They discontinued the production in 1996 and since then there was no news related to any bikes by the company. Now, the Mahindra backed motorcycle company is back with a banger by releasing an official tweet and teaser on its sibling socials Jawa motorcycles.

Recently Yezdi motorcycles were spied testing on Indian roads recently and now with their official twitter online and tweets by Jawa we can anticipate that the bike manufacturer will reveal something special in November 2021. In the teaser, there is no official date or models are revealed but all it says is they are back in business which is a piece of good news for bike enthusiasts.

The bike manufacturers also mentioned the name Roadking in their tweet which has already been registered in the Indian market. The first motorcycles by the company can be Roadking and an Adventure variant of the same. Even both the motorcycles have been spied testing in an undisguised avatar as well. The pair of classic legends came back in the Indian market back in 2018 and since then they faced a supply chain problem.

But it’s good to know that the bike manufacturers are back on track and are still able to expand their sales even with the global pandemic over their head. They also expanded their dealership from 188 to 257 during this phase. The company claims there will be more than 100 dealerships added by December to even smaller towns. The classic legends by Yezdi will be utilising a manufacturing facility based out of Pithampur in Madhya Pradesh which is owned by Mahindra & Mahindra. Upon launch, the bike will compete against the roadsters like Royal Enfield’s cruisers and Honda H’Ness.