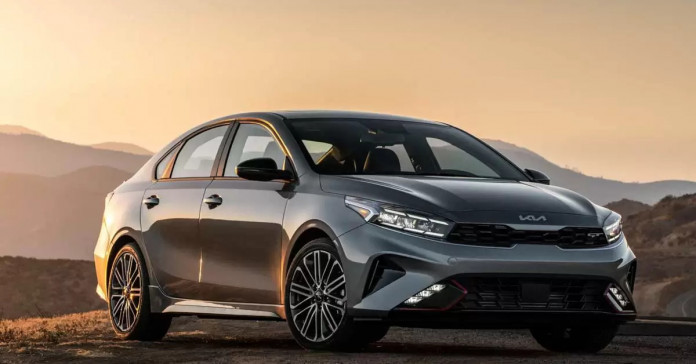 Kia has started pushing out updates to almost all its cars in the international market as well as India. Recently, the company updated K3 in its home market South Korea and the same update was applied to the North American version as well. The update was a mid-life one and we can expect the company to bring more changes in the coming months. Talking about 2022 Kia Forte, which the company unveiled today, has new interior updates as well as exterior ones.

The car is offered in 4 variants in the international market: FE, LXS, GT-Line, and GT. With the first glimpse, we can notice that the frontal changes include the new Kia logo, redesigned headlights, restyled and updated Tiger Nose grille and an updated bumper.

The more powerful GT variants get more aggressive bumpers. Not only the bumpers, the horizontal stacked LED fog lamps, redesigned LED tail lamps and black elements on the air inlets give the car an even sharper look. As standard, all the models get a set of newly designed alloy wheels and a boot lid spoiler. 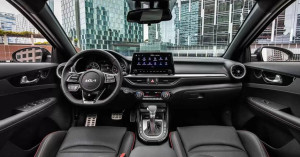 Not only the exterior, but also the interior of the car received major revamp and updates. Starting with a new 10.25-inch touchscreen infotainment system which was 2-inch smaller in the previous generation and supports wireless Apple CarPlay and Android Auto connectivity. The instrument cluster is upsized by 4.2-inches as well. Other features include Electric Parking Brake with auto-hold function, a USB charger for the rear occupants, Auto climate control and more.

The engine on offer remains the same, that is a 2.0L option that produces a maximum power of 201hp and 265 Nm of peak torque, the company also tweaked the exhaust so the car now gives out an even sportier sound. The other engine option is a 1.6L one that produces 147hp of max power and 179 Nm of torque. Both the engine options are paired with a seven-speed DCT giving power to the front axle.