New Bajaj Dominar with touring accessories spotted ahead of its launch

Bajaj was spotted with new touring accessories on.

Dominar is a popular bike by Bajaj which is famous for its touring capabilities and powerful engine. And now a new Bajaj Dominar with touring accessories was spotted. The first model was launched way back in 2016. Being a tourer the Dominar does not compensate for power at all. The sales figure of this bike has always been respectable and now a tourer version of the same was covered by Road Activities an Indian YouTuber. After the launch of the new RC fleet, Bajaj is getting serious about its premium motorcycles.

From the leaked images we can say that there are a bunch of exterior cosmetic add ons that the company will be providing to its customers. It includes a new windscreen which is bigger and wider than the existing one. A backrest for the pillion to provide comfort while covering long rides. We can also see a luggage carrier which is a great add on for the people who go on long bike rides and tours. The engine add-ons are unknown but we can anticipate that there won’t be any engine upgrades for the same. 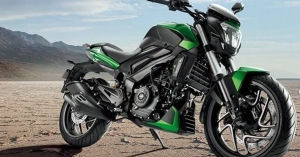 The ground clearance and weight may be increased but the current version retails with 57 mm while the kerb weight is 187 kg. As a touring machine, the Dominar 400 gets a large 13-litre tank to ensure less stopping for refuelling. The current generation starts with a price tag of Rs 1.90 lakhs ex-showroom, India but we can expect a price hike on the newer variant.