Jawa cruiser bike has been spotted testing on roads of Pune once more.

For the second time, a new Jawa cruiser bike spied testing. After its launch in India in 2018, the company is dedicated to delivering retro-styled bikes that many enthusiasts love. With the current model having respectable sales, Jawa is planning to increase its fleet to get even better numbers. The spy shots were taken in Pune by Suyog Phadtare while the bikes were testing on the roads in a full camouflage wrap.

Just like its other sibling, the bike has retro styling with round head laps and orange halogen indicators. Other features like a teardrop fuel tank, round rear view mirrors broad fenders and more. We can also see that the dimensions look close to that of Perak and there is a possibility that this bike is a tuned version of it. The pillion seat on offer is larger than any other Jawa bike. suspension duties are done by telescopic pairs in front and twin shocks at the rear. 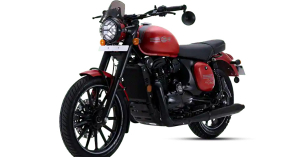 The bike shares the same minimalist design just as its other sibling with dual-tip exhaust. We can anticipate that the bike will have a throaty sound with blacked-out parts all over the body. Just like a cruiser, this spied Jawa cruiser also has an upright sitting position ideal for long rides with a wide handlebar and front footpegs. The test mule was spotted with an inverted speedometer used in the current Jawa bike, but according to the current trend, the company may give Bluetooth connectivity as a feature.

Powering the new cruiser is the same 334 cc used in Perak which is a single-cylinder, liquid-cooled, DOHC unit. The same is capable of producing 30.64 ps of max power and 32.74 Nm of peak torque, mated with a 6-speed gearbox. In the images, we can see the bike is paired with alloy wheels when a spoked opinion can be anticipated for retro lovers. There are disc brakes in both front and rear and the bike will come with dual-channel ABS as standard. Jawa cruiser will directly lock horns with Royal Enfield Classic 350 upon launch.