The name Yaris was recently discontinued by the company for Indian markets. But now the Toyota Yaris hatchback has been spotted being tested on Indian roads. The car has been there in International markets for years now and is known to be one of the sportiest looking hatchbacks. The fourth generation of the beautiful hatch made its global debut in 2019 and we can anticipate that the testing model is the next generation.

There are often times that cars from some other country are tested somewhere else to see the durability of the same. The spotting was on the roads of Delhi. As of now as we know the company already discontinued the Yaris segment and it already has Glanza on its premium hatch segment, it’s unlikely to see the launch of the car in India. In India, the company has joined hands with Suzuki to share cars in India with rebadged models. The same case can be seen with Glanza which is a rebadged version of Baleno.

As the news surfaced the company will also be launching a rebadged version of Suzuki Ciaz which the company will name Toyota Belta. Due to Belta and no growth in sales the company discontinued Yaris. In the spy shots, we can see the car flaunting its new design with an even wider front grille, sharp projector LED headlamps with integrated daytime running LED DRLs.The bumper has been revised as well giving the car a muscular look. At the rear, we get the bulky bumper and all LED set up along with a small spoiler on the roof. 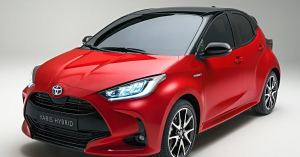 The car was obviously in heavy camouflage at rest and interior details were not known. But with the previous updates by the company, we can anticipate that the minimalistic dashboard will now get an 8-inch touchscreen infotainment unit with Apple CarPlay and Android Auto. Also a 4.2-inch instrument cluster with connecting car tech. For security, the company added a centrally mounted airbag and advanced driver-assist system lance trace assist and adaptive cruise control.

For engine options, the Yaris hatchback gets 3 options. The first 1.0-litre, three-cylinder turbocharged petrol engine pushed out 89 bhp of power and 141 Nm of torque. The  1.5-litre, four-cylinder, naturally aspirated petrol-engine dishes 118 bhp and 140 Nm of torque. While the same engine with a hybrid system churns out a maximum power of 195 bhp and 261 Nm of torque. The 1.0-litre engine comes with a 5-speed manual only while the more powerful 1.5-litre variants are available in either 6-speed manual or CVT transmission.