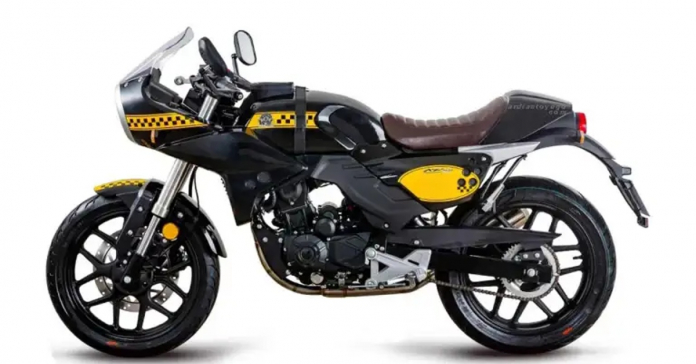 All the companies are pushing their cafe racers as it has always been a topic of sweet tooth among motorcycle enthusiasts. And so the Lifan KPM 150 cafe racer bike made a global debut. The design of every retro motorbike reminds us of how much ahead we have come in technology and the looks of the bikes. Usually what the bike manufacturers do is pair the old school design with new engines and technology to revive their legacy. A Chinese bike manufacturer named Lifan did the same and brought up a 150cc Cafe Racer at an affordable price tag.

The new Lifan KPM 150 is designed around the old school styling with modern tuneups to make it attractive for the young crowd. The bike is based on the company’s own naked streetfighter KP150 and borrows a lot of components as well. The bike borrows the fighter jet-like design which was used in motorbike races in the early days. The KPM 150 sports a round headlight, ribbed pattern single-piece seat and teardrop designed fuel tank.

Lifan also provided clip-on handlebars and rear placed footpegs for giving the riders a tuck-in and aggressive feel. The footpegs are made out of aluminium for durability and sturdiness. The big and bold tank can hold up to 13-litres of fuel. Other noticeable aspects are the rearview mirror positioned at the end of the handlebar and a decent sized front visor. Talking about Lifan KPM 150 design, we see gloss black paint on the body as well as alloy wheels with sporty yellow graphics all over enhancing the retro nature of the bike. 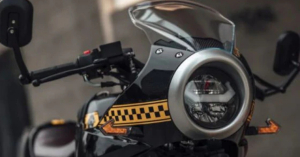 Talking about the features, they are pretty basic just like all the retro-styled bikes have nowadays. A circular digital instrument console that shows basic information like the speed of the bike RPM and fuel range along with gear positioning. The company has also fitted the bike with a USB port for users to charge their devices on the go. Additionally, the bike is also equipped with all LED setups with integrated daytime running LED DRLs.

The engine used in the Lifan KPM is a 150cc single-cylinder water-cooled unit. The same is capable of pushing out 17.4 bhp of power with 14.5 Nm of torque. The engine is paired with 6-speed manual transmission. The bike has a good power to weight ratio as it weighs only 190 kg dry. For suspension, the bike has USD forks up front and a swingarm at the rear while braking duties are done by the Front disk and rear drum paired with single-channel ABS.