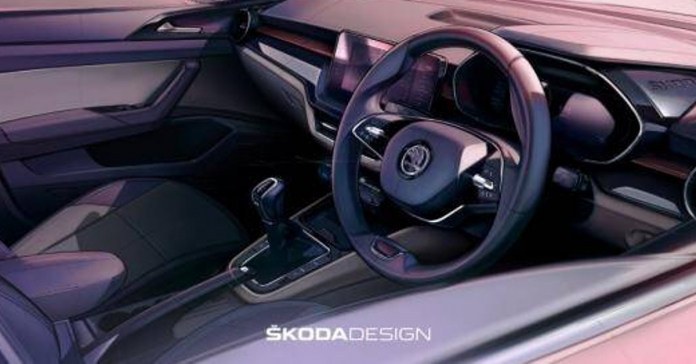 Skoda is going to launch Savia soon and after the interior now the interior sketch has been released by the company.

The Skoda Slavia interior sketch was finally released by the company ahead of the launch of the car. Earlier the company teased the design by showing us the sketch of the exterior and that it looked gorgeous. Earlier this year the car manufacturer launched its facelift for Octavia and SUV Kushaq. And now recently the company discontinued Rapid giving us the clue for Slavia replacing Rapid’s place. Slavia will be a significant update in terms of styling as well as features as compared to its discontinued sibling.

As from the earlier sketches, we can tell that Slavia has much sportier looks than rapid. Many bits are also taken from the updated model of Octavia. The new Slavia will have a sharp line all over the body adding sharpness to the sportier looks. The car holds the signature grill by the company along with sharper headlamps holding the daytime running LED DRLs. The alloy wheels look sportier adding to the new front and rear bumper design. The OVRms are body-coloured with integrated turn signals.

We can see a slope starting from the blacked-out B pillar going all the way back to the rear of the car. The taillamps have an LED setup that goes all the way to the boot. The top trim of the car is likely to get a sunroof as well. If the car is replacing Rapid and will be as affordable as it was, Sclavia will easily become a head-turner. We can anticipate the car to be the tallest and widest sedan of the segment. With the company claims we can also expect the car to have the largest boot space. 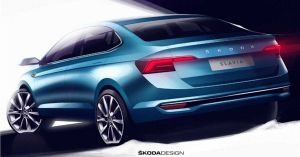 Read Also: NEXT-GEN FORD RANGER TEASED AHEAD OF ITS LAUNCH

The car will share the new platform same as Kushaq and we can expect it to have similar types of features. Now with the interior design sketch given by the company, we can see the design is identical to Kushaq. It will sport features like a 10-inch touchscreen infotainment system, support for Apple CarPlay and Android Auto, auto AC, wireless charging, leather seats, and a Skoda sound system.

The car will be sharing the powertrain with Kushaq. Powering the car will be a 1.0-litre TSI petrol engine that puts out 114 hp of max power and 178 Nm of peak torque. Consumers can buy the car with either a 6-speed manual or 6-speed automatic transmission. Skoda will also provide the car with a more powerful 1.5-litre TSI petrol unit that churns out 148 hp of power and 250 Nm torque. It is offered with two transmission options first being a 6-speed manual and the other a 7-speed DSG unit.

Vipul Chandwanihttps://www.motorbridge.com/
Previous article
Next-gen Ford Ranger teased ahead of its launch
Next article
Kawasaki Z400RS can be the next retro bike by the company