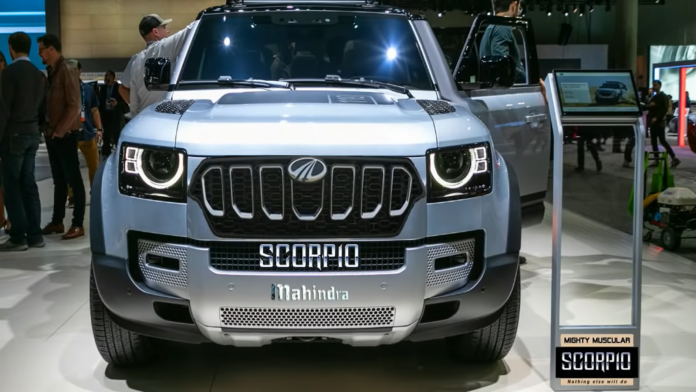 Mahindra Scorpio has yet again spied in a camouflage wrap. After Mahindra’s new release of XUV 700, the company seems to be working hard to give users what they really want. Although it’s not very clear with the leaked images what the new-gen Scorpio is packed with, we have got a fair bit of idea. Here are a few details we could expect from the company.

We could see in the leaked video that the New designed SUV comes with a beautiful LED setup with both in rear and front. Paired with the new grill and vertically oriented tail lamps, the design of the SUV looks modern. Mahindra Scorpio can be seen paired with 10 spoke alloy wheels roof mounted spoiler just above the stoplight. Pair of roof rails and opening on the tailgate, which is mounted sideways, can also be seen in the shots.

Next-gen Scorpio looks wider and bulkier than the current-gen Scorpio, which will surely give extra room inside. It is expected from Mahindra to use the new ladder-frame chassis for its next-Gen model. 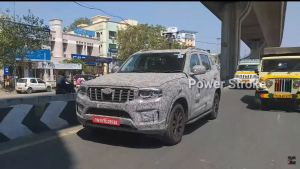 It was really difficult to see the interior of the Next Gen Scorpio in the camo wrap, but after the release of XUV 700, we could expect a lot of things to be similar in both the SUVs. A large touch screen infotainment system with the support of Android Auto and Apple car play could be there. An electronic sunroof paired with HSA and HDC for all the adventurous rides will be pleasing. With standard features like automatic climate control, steering mounted buttons and the AC vents for both front and rear make it look premium and futuristic.

After so many leaked teasers by the company and others, we are really excited to see the release of Mahindra’s new SUV lineup. Although it’s unclear in which segment this SUV will be placed, as after the release of XUV 700 and the upcoming facelift of XUV 500, what are the exact thoughts of the company. The Next Gen Scorpio’s other competitors will be cars like Kia Seltos, MG Hector Plus, Hyundai Alcazar and TATA Safari.