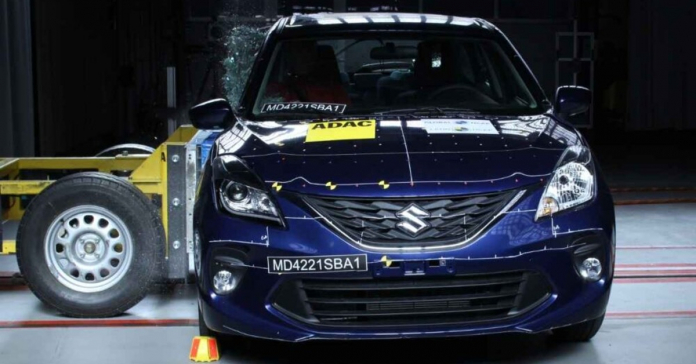 Made in India Maruti Suzuki Baleno Scores 0 in Latin NCAP

It was a shock to see that the Maruti Suzuki Baleno scores 0 in Latin NCAP. The car is one of the best selling premium hatchbacks in India. The car gives a tough competition to models like i20 and Altroz. The Indian made Baleno is produced in Gujrat and from there it is shipped to other parts of the world. The car was tested for the safety standards in Latin NCAP where it gave a disappointing score of 0.

Toyota Yaris which now has been discontinued in the Indian market was also tested alongside and scored only 1 star. The Indian made Baleno was tested with 2 airbags and achieved 20.03% in the Adult Occupant box, 17.06% in the Child Occupant box and 64.06% in Pedestrian Protection and Vulnerable Road Users box. On the other hand, the car scored 6.98% in the Safety Assist box.

Alejandro Furas, Secretary-General of Latin NCAP said: “Baleno’s zero-star is part of an ongoing disappointment, after Swift’s zero-star rating some weeks ago. With especially poor safety performance in adult and child occupant protection on offer from Suzuki as standard to Latin American consumers.”

Read Also: GET YOUR CAR WINTER-READY, 5 THINGS YOU HAVE TO KEEP IN MIND

The zero stars explain poor side impact with low whiplash scores due to lack of U32  proof of rear impact test. The test module was also not given standard side head protection airbags, standard ESC and the decision of Suzuki not to recommend Child Restraint Systems (CRS) for the test shows the carelessness by the car manufacturers. The safety standards of all the countries should be not equal but at least near to European standards.

The car available in Europe sports 6 airbags and ESC as standard. Suzuki also refused to test its optional equipment, creating a whole bunch of questions in consumers minds. Adding to this Stephan Brodziak, Latin NCAP Chairman said: “It is unfortunate to have another zero stars car from Suzuki, in this case, the Baleno model, which in some countries is marketed as” Good, Nice, Baleno”, to which we should add “Low safety”.

It’s disheartening to see that the companies are prioritising their sales rather than the consumer’s safety. Last month’s performance by the company’s own Swift should have raised alarms in the mind of manufacturers. But now the other cars as well scoring 0 will surely impact the reputation of the company.

Vipul Chandwanihttps://www.motorbridge.com/
Previous article
Get your car winter-ready, 5 things you have to keep in mind
Next article
Bajaj Pulsar 250cc series launched in India