2023 BMW X1 spied testing way ahead of its launch

2023 BMW X1 , which is to arrive in 2022 has been spied on way early by a company named Carscoops. The car was spotted in a full camouflaged prototype of the most powerful M series variant on both public and private roads. Though the 2023 BMW X1 M35i is not a full-fledged M series still it is the performance variant of an SUV fitted with M series oriented parts.

All BMW and Mini cars ride on the updated version of UKL/FAAR and the same can be expected with the new X1 as well. The SUV is fitted with large brakes, stiffer tuned steering for track-oriented response and stiff suspension. The equipped body kit seems more aggressive than the standard X1 that includes a sporty front and rear bumper, a small spoiler extending the roof of the car, side skirts and body-coloured fenders. 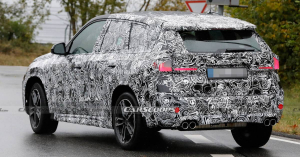 The major update we can spot is fully functional quad exhaust tips adding the cherry on top of the looks. There were rumours of full-fledged M series for X1 but after the leaks, it is likely to happen as BMW is willing to invest more money in their cheapest variant of SUV. To make its M series equipped the company has to spend more on R&D and also the car will lose its purpose of being affordable.

Talking about the engine of the car, the SUV is powered by a 2.0-litre twin-turbo four-cylinder engine mated to an eight-speed automatic transmission and standard xDrive AWD system. The same is capable of producing 302 hp of max power and 332 lb-ft of peak torque. It is also rumoured that the engine will be returned to produce extra power. The expected power figures of the new X1 M35i will be above 350 hp. With the increased power the SUV will lock horns with a more powerful Mercedes GLA 45 S.