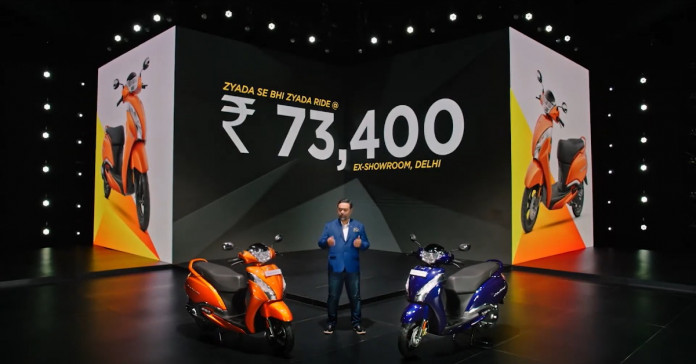 After so many teasers, TVS unveiled Jupiter 125.

The company launched its new and more powerful 125cc scooter today. The TVS Jupiter has become a well-known name in India. The scooter was first released back in 2014 and the company has been giving it regular updates. The Jupiter 125 is the biggest revamp this scooter can get. With the beautiful new design and new technology, TVS has put a price tag of Rs 73,400 ex-showroom, India on its new scooter.

The bookings for the same are open and the two-wheeler is available in 3 variants: Drum, Drum Alloy and Disc variant. It will also feature some new paint schemes like Dawn Orange, IndiBlue, Pristine White, Titanium Grey. The rest of the features are mentioned below.

The new Jupiter 125 has beautiful chrome accents, daytime running LED DRLs. Following the trend, this also has a 3D emblem and painted inner panels. The top-end disc variant of the scooter will feature diamond-cut alloy as well. There are major design revamps making it look distinct from its younger 110cc alternative.

There are significant changes on the feature side. The new semi-digital LCD display shows information such as smart alerts, distance to empty, average and real-time mileage indicators. TVS has changed the position of the fuel tank to increase the boot space to 33 litres. Due to this, the scooter gets a low centre of gravity. 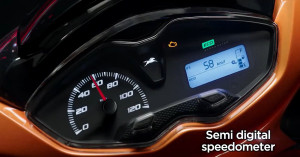 Read Also: SKODA SALVIA WILL BE THE NEW MADE FOR INDIA MIDSIZE SEDAN OFFERED BY THE COMPANY

Adding to this Jupiter 125 gets body balance technology paired with a 3-step-adjustable rear shock suspension with a Monotube Gas-charged canister. The front suspension duties are done by the same upside-down monoshock suspensions which are used in its 110cc twin.

Consumers can visit the nearest showroom to get a test ride and book this scooter for them. TVS Jupiter 125 will directly compete against Honda Activa 125, Suzuki Access 125, Hero Maestro Edge 125.

Vipul Chandwanihttps://www.motorbridge.com/
Previous article
Skoda Salvia will be the new made for India midsize sedan offered by the company
Next article
BMW C400 GT maxi-scooter teased ahead of its launch