The classic roadster will launch in the Indian market soon.

Kawasaki  Z650RS recently made a global debut, which is based on its naked streetfighter Z650. We were expecting the bike will soon enter the Indian market as well. Adding to it, now we have seen that the Japanese manufacturer has started testing for its new bike and it is expected to launch anytime soon. The classic roadster will be launched in India by the end of this year. The design language is highly inspired by its sibling Z900RS. Even after making a global debut the mule was spotted wrapped in camouflage.

The styling of the bike looks similar to the international variant that was released last month. If you look closely, you can see a different odd-looking pillion grab handle on the tail section of the test vehicle. The rest of the details like the round retro styled LED headlight, twin-pod speedometer and circular rearview mirrors remain the same. Other design highlights like multi-spoke alloy wheels, teardrop-shaped fuel tank and underbelly exhaust have been carried from the international variant as well.

The all blacked out panel with chrome finish all over the parts of the bike gives a modern touch to the already beautiful retro-styled bike. In the international market, the bike is available in three colours Candy Emerald Green, Metallic Moondust Grey/Ebony and Metallic Spark Black. These three paint schemes can be guessed to enter the Indian market as well. 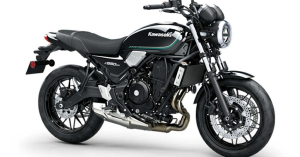 The bike is believed to be on the same trellis frame as the underpinning is borrowed from other 650cc models by Kawasaki being Z650 and Ninja 650. The fully digital headlight and semi-digital instrument cluster are supported by a 41 mm front telescopic suspension.

For the rear Kawasaki will use a horizontal backlink preload-adjustable monoshock. The Z650RS comes with dual-channel ABS as standard while the braking duties are done by twin 300mm discs up front and a single 220mm disc at the rear.

Powering the Kawasaki Z650RS is the familiar parallel-twin, liquid-cooled engine that punches out 67.3 bhp of power at 8,000rpm and 64 Nm of torque at 6,700rpm. This engine is coupled with a 6-speed gearbox which comes with a slipper and assists clutch. The bike is expected to be priced between Rs 6.50 – 7.0 lakh ex-showroom, India.