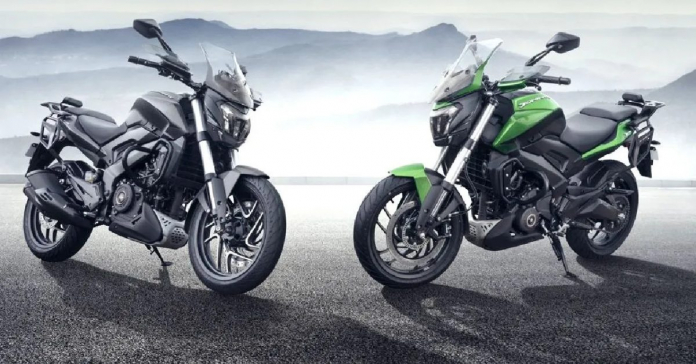 Dominar got even better now.

Bajaj launched its Dominar 400 with touring accessories fitted directly from the factory. The sports tourer was priced starting at Rs 2,16,648 ex-showroom, India. The only major change that we can see on the new version is aesthetics while the engine used remains the same. It was expected as the company recently made the engine BS6 compliant and an update was not contemplated.

Major updates are done with touring accessories such as a tall visor, engine bash plate, leg guard, handguard, carrier and back stopper, and more. The new Dominar 400 from Bajaj can be seen with a distinct front end sporting the tall bubble visor that has been developed by using CFD technology. Due to this, the riders can get good protection from wind blasts on long open roads. We can also spot a unique handguard with flexible winglets providing better wind protection and giving a little stability while speeding.

At the rear, Bajaj added a fully functional and much-needed luggage carrier which makes the motorcycle ideal for long tours. The back stopper will provide a comfortable ride for the pillion as well. The company made the Dominar 400 ready for big boulders and bad roads by adding a new engine bash plate with an integrated metal skid plate. 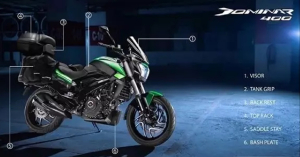 Narayan Sundararaman, head of marketing, Bajaj Auto said “We have thoughtfully designed and smartly handpicked the touring accessories that… accentuate the style and tour-worthiness of the motorcycle (and) amps-up the rider’s safety,”. Well, we can say he is not wrong as the company provides users with optional leg guards for protection during fall and saddle stay for your luggage protection.

Bajaj also integrated navigation stay which is made out of aluminium for your navigation device to the vehicle. Anticipating that it will be used as a mobile holder for a navigation company also provided with a USB charging port so your devices never run out of battery juice on the go.

The engine used remains the same detuned 373.3cc liquid-cooled DOHC FI engine capable of producing 40 PS of max power and 35 Nm of torque. Suspension duties are still done by the old 43 mm up-side-down (USD) forks that provide better handling and comfort. The sporty sounding machine with the twin-barrel exhaust will be available in two colours, Aurora Green and Charcoal Black.