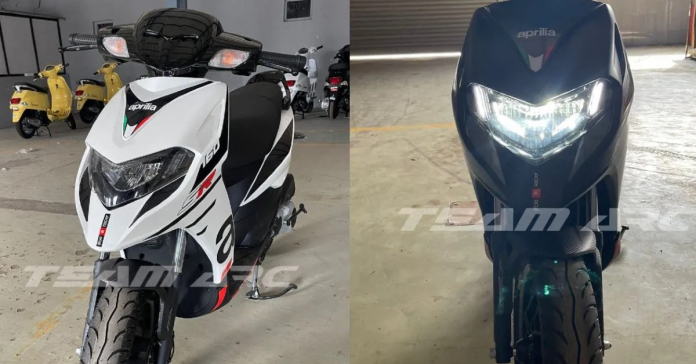 Aprilia SR 160 is back with a few updates, spy shots reviled

The new 2021 Aprilia SR160 facelift will be revealed in India anytime soon. Two prototypes of the newly updated scooters were spotted by Team ARC Bengaluru. A few days back a camouflage version of the same was spotted being tested on Indian roads as well. But this time the scooter in the image looks road-ready and we can expect the launch soon.

The expected update remains to be only cosmetic as the engine had an update already and is still very refined. In the image, we can see the facelift flaunting its updated body graphics and fresh design along with a new front headlamp. Adding to this we spot a single prince pillion grab rail which was updated from a split one in the previous generation.

The front headlights have a single LED lamp as compared to dual halogen and daytime running LED DRLs can also be seen in the spy shots. The lower front now extends the side fairing which is inspired by the current-gen motorbikes by the company. The image of the scooter was captured in two paint schemes. The first one is white with black and red decals and the other one seem like a carbon finished matt black colour. 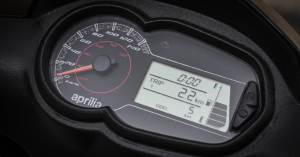 The seats and turn indicator features are the same. The turn indicators are housed on the handlebar which can only be found on Aprilia scooters. The Italian flag has been hidden on the decal so precisely that it looks like the part detailing below the front branding of the scooter.

The engine powering the 2021 Aprilia SR160 facelift is the same 160cc single-cylinder, a fuel-injected motor that puts out 10.8 bhp of max power at 7600rpm and 11.6 Nm of torque at 6000rpm. As it is an automatic transmission scooter it is paired with a CVT gearbox. Suspension remains the same being 30mm telescopic forks upfront and a mono-shock at the rear. Braking duties are done by a 220mm disc at the front and a 140mm drum at the rear, the company paired the scooter with ABS as standard.

The heavy 122 kg current-gen will surely gain some weight for the facelift model and the scooter is balanced over big 14-inch alloy wheels. The semi-digital instrument console is still being used in the current model with handle guards as accessories. The current SR 160 is priced between Rs 1.09 lakh and Rs 1.16 lakh ex-showroom, India and the facelift is assumed to receive a slight price bump. For now, there is no direct competition for scooters in the Indian market.