Hero MotoCorp’s Xtreme 200 4V and Xpulse 200 4V was spotted in India and is even expected to launch before Diwali. Just after the leak a test mule of Xtreme 200S has been spied testing on the Indian roads. Just like its 200cc siblings, we can expect a 4V revamped engine for this bike as well.

Though from the leaked image we can see the same body design including the graphics on the side fairing. A slight red coloured tint can be seen on the fuel tank which is contrasting the black body panels. For now, it’s not sure if this vehicle is a prototype or production-ready one but with the recent spotting of new hero bikes, we can make sure that the company is keeping the aesthetic changes to a minimum.

The prime example of this is the updated Xpulse 200 4V, which only has a new paint scheme and graphics to separate it from the ongoing version. Even with the Xtreme 200R the body language, design and looks are similar to its younger Xtreme 160R. Nevertheless, the new design on Xtreme 160R is better than the discontinued model of the same. 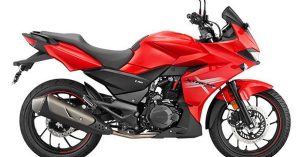 Read Also: TATA PUNCH VS TATA NEXON: WHICH SIBLING IS FOR YOU?

Powering the bike will be the same 199.6cc single-cylinder air-cooled engine, The 2V version of the bike produces 18.1bhp at 8,000rpm and 17.1Nm of torque at 6,500rpm. The 4V motor is expected to generate more power and torque as compared to the 2V version.

The 5-speed transmission is likely to remain the same as on the current version. The bike will still be offered with a single-channel ABS and braking duty done by a 276mm front disc and a 220mm rear disc. The bike will be more expensive as compared to the current 2V model

Vipul Chandwanihttps://www.motorbridge.com/
Previous article
Tata Punch Vs Tata Nexon: Which sibling is for you?
Next article
2021 Maruti Suzuki Celerio to launched on November 10