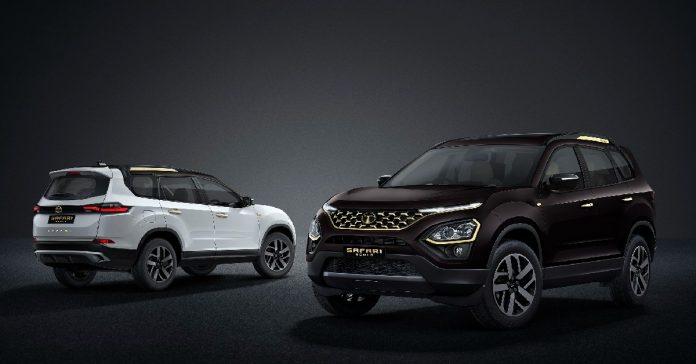 Tata has finally launched its flagship SUV with a touch of gold and more premium features.

Tata recently revamped its safari and now it has become the flagship car of the company. The company was planning to bring out a gold version of the car for IPL(Indian Premier League) whose second phase was going to be conducted in UAE. As being an official partner of IPL the company decided to launch two gold variants of its flagship SUV. The first option is White Gold and the other being Black Gold. Here are the rest of the specifications for what the new Safari Gold edition has to offer.

There are a lot of design changes in the interior as well as the exterior of the car. The exterior looks even premium with a gold accent on the grill as well as below the headlights. The new colours look bold especially the white one having a black roof gives it a dual-tone look. The black variant has a gold black interior matching the exterior of the car. We can also see the golden accent around the AC vents as well.

For the white variant, we get a piano black accent near the gear lever. Replacing the Black dashboard is the Oyster white coloured panel which looks premium. The seats are made up of genuine leather offering ventilation on both the 1st & 2nd rows, a wireless charger, an 8.8-inch floating touchscreen infotainment system with advanced ESP along with 14 functionalities combined with the support of  Android Auto & Apple Carplay over Wifi. With a beautiful interior and exterior design makes it the most impressive version of the Safari yet. 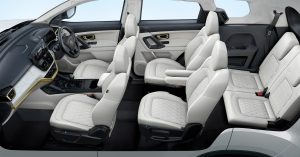 The Tata safari gold edition is designed with the automaker’s Impact 2.0 design language and OMEGARC architecture, derived from the D8 platform from Land Rover. Tata has taken care of safety as well by providing 6 airbags, cornering stability control and a reverse camera along with cruise control.

There is no change in the Engine department as it is continued to be powered by a 2.0 litre, 4 cylinders, turbocharged diesel engine churning 170 hp peak power at 3,750 rpm and 350 Nm peak torque at 1,750-2,500 rpm. The car will be available in either a 6-speed manual and a 6-speed torque converter automatic transmission.

The Tata Safari Gold Edition is 1.3 lakhs more expensive than the top version, which is the XZ+ ADV variant priced at Rs 20.59 lakh and the XZA+ ADV trim that is priced at Rs 22.02 lakh. The starting price of the Gold variant will be Rs 21.89 lakh for the manual and Rs 23.18 lakh for the automatic. All the prices are ex-showroom India.

Vipul Chandwanihttps://www.motorbridge.com/
Previous article
Force Gurkha debut date set on September 27: Here is everything to know
Next article
3 ways to improve the mileage of your motorbike or scooter