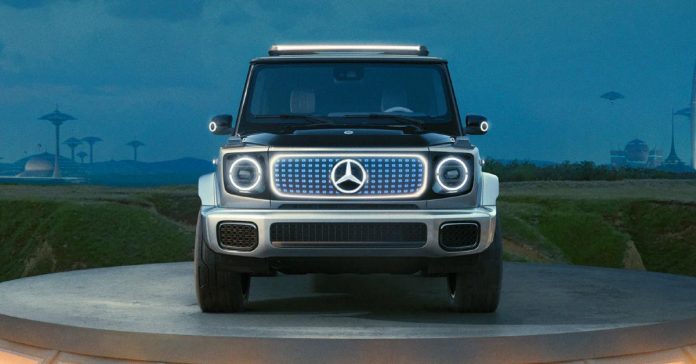 One of the most popular lineups by Mercedes makes a debut in an EV avatar.

G-Wagon is one of the most popular series in the Mercedes Benz SUV lineup. Recently the company took a big step towards electrification of the entire line up. Mercedes has officially unveiled a concept of the first SUV in G-class to become fully electric. The SUV was showcased recently in IAA Mobility Show 2021 in Munich. Mercedes mentioned in the event that this is the concept of how EQG will look in the future. Here is everything we know about it.

The SUV holds the same dual-tone design which is used in other electric vehicles offered by Mercedes Benz, an example being the EQS luxury sedan. The exterior includes a solid black panel with a 3D company logo replacing the front grill and has been installed in between illuminated trim elements. Upfront holds the round LED lights matching the current patterns of classic G-Wagon. The weight of the EV is on large 22-inch aluminium wheels, which look bold. Replacing the rear spare wheel company showcased a storage box. The concept EQG follows the same boxy design language as the good old G and is still underpinned by a ladder on frame chassis by the company. 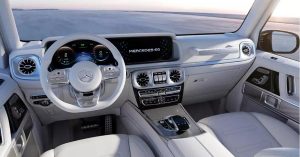 Exact power figures were not mentioned at the event by the company but it is expected that the SUV will be powered by 4 powerful electric motors mounted on each wheel. Mercedes claims that each of these motors can run independently. Connecting the motor will be a two-speed gearbox with the offering of low-range and high-range gearing. With these unique driving characteristics, the Concept G wagon is as adventure-ready as its current fuel-burning sibling.

Currently, the G wagon is available in India with two variants. The first being the G350d and the other being the powerful race-ready AMG G63. The AMG variant is powered by a twin-turbocharged 4.0-litre V-8 petrol motor which produces 577 bhp and 850 Nm of peak torque making the wagon touch 0-100kmph in 4.5 seconds. With such big figures, we can expect a lot from the upcoming electric variant as well.

Mercedes said that the instant torque from the four motors and an electric powertrain will further enhance the SUV’s offroading capabilities. All motors working independently will give the G wagon enormous pulling power along with controllability.

It’s exciting to see all the big brands jumping towards EV variants as soon as they can. The exact battery range or performance figures of this concept is not yet revealed by the company. All we can say is that the batteries will be integrated into the ladder frame to ensure a low centre of gravity.