KIA has not launched its X series of Seltos, yet it was spotted in the showroom.

After KIA entered the Indian market in 2019, Seltos was the company’s first release. After the success of Seltos, KIA added Sonet and Carnival to its car lineup for Indian consumers. Since then KIA has become popular among Indian consumers and is still growing strongly day by day. Seltos being the most sold car by the company, KIA has introduced a Sportier X-Line for its top-selling car. Here is everything we know ahead of its launch.

Talking about the exterior there are cosmetic changes on the body to make the SUV sportier. As showcased in auto Expo 2020, X-Lineup has a revised front and rear bumper skid plate. With a little touch of chrome over headlights and taillight, make the car finish look more premium. The SUV has a new matte Graphite colour scheme, which also follows on the front black grille. The car has all LED setup as the normal Seltos offers and the car flaunts X badging all over the body. X-Line moniker on the front grille and on the rear below KIA’s new badging. The door and boot lid also holds the X-Line badging making the consumer sure that it’s no normal Seltos.

There is a significant change with alloy wheels that are now of 18-inches rather than 16-inches used on the normal variant. KIA also added orange highlights on the front and back followed by orange hubcaps making it look sportier. 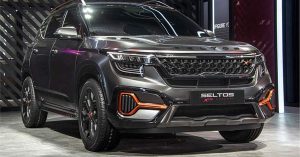 The interior of the KIA Seltos X-line looks similar to its normal variant with just a lot of black treatment. Similar to its top variant the X-line up is packed with a 10.25-inch touchscreen infotainment system supporting Android Auto and Apple Carplay. The car is packed with 8 Bose surround sound speakers, giving you a great audio experience. Seltos X-line comes with an electronically powered driver seat, single-pane sunroof, wireless charging as standard. KIA never compromised with safety in any of its cars and this variant is no different packed with 6 airbags, a rear parking sensor paired with a camera, ABS and EBD.

There is no change on the engine front. The X-series will be powered by the same engines as the regular Seltos. There are two engine options, one being the 1.4-litre turbo petrol producing 140hp and 242 Nm of torque. On the other option, the SUV will be available with a 1.5-litre diesel capable of churning 115 hp and 250 Nm of torque. For manual enthusiasts, it will be a sad story as the car is available only with automatic transmission.

The X-line up will be really exciting for KIA enthusiasts and will also attract new customers. We feel the company should have given some engine changes too, that would have made the car even sportier. Also, adding a manual version would have been the cherry on top. Kia Seltos can be booked at the nearest showroom for an additional Rs 50,000 premium over the segment’s top GTX model.