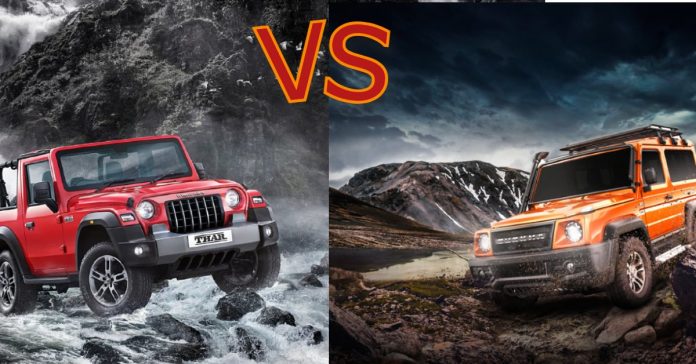 After Force launching its new Gurkha it will lock horns with Mahindra Thar. Here is a detailed comparison

Force Gurkha Vs Mahindra Thar will be a competitive comparison as the Force has launched its new Gurkha SUV. It starts with a price tag of Rs 13.59 Lakhs ex-showroom, India. The SUV is equipped with full off-road capabilities and has a completely new avatar with more strength. The direct competitor of the car is Mahindra’s Thar which is also capable of tough offroading and is priced below Rs 20 lakhs. Now the question arises which one is better. This comparison will help you decide.

Both the SUV are freshly designed by the companies still holding the boxy design as their previous generation. Gurkha gets circular LED headlamps with integrated LED daytime running lights.

The front profile gets a redefined bumper with a grill holding a big Gurkha badge instead of Force. The clamshell bonnet and high mounted snorkel remain the same as the previous-gen. The side profile is improved with chunky black cladding and tough-looking roof racks. The new alloy wheels are improvised and redesigned as well. At the rear is a chunky bumper and centre mounted spare wheel.

Mahindra Thar on the other hand has a strong road presence just like its predecessor. With a slated grille design and round LED that looks inspired by the Jeep. With new body cladding and bold looking alloy, the design adds a zing to the SUV. The rear car gets LED tail lights with a revised windscreen and bold bumpers. It seems like the new Thar has been to the gym to gain some extra muscles compared to the previous-gen. 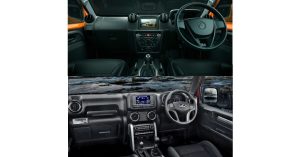 The Interior of both the SUVs has been revised. Force Gurkha gets a semi-digital instrument cluster, a seven-inch touchscreen infotainment system with Apple CarPlay and Android Auto. Paired with our speakers, power windows, dual USB charging points, TPMS, the rear parking sensor adds a certain appeal as compared to the bare bone design of the previous generation.

Thar looks more attractive from the inside as compared to both the previous generation and new Gurkha. It gets features like It gets a seven-inch touchscreen infotainment display with smartphone and smartwatch connectivity. Steering mounted controls, electric ORVMs, real-time adventure statistics display cluster, keyless entry, semi-digital instrument, cruise control and more inside the cabin.

The Force Gurkha is powered by a 2.6-litre turbo diesel engine sourced by Mercedes Benz. It is mated with a 5-speed manual gearbox. The engine puts out 90 bhp of max power and 250 Nm peak torque.

Both the SUV’s are off-road ready and come with 4×4 technology. Mahindra certainly has more power than Gurkha and has an automatic transmission as well. On the other hand, Gurkha is appealing to the old school adventure seekers.