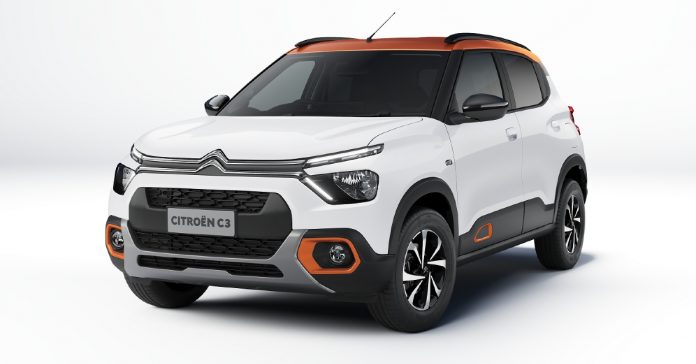 Citroen C3: Designed in and for India made a global debut

All eyes were on India when Citroen made a global debut. Here is everything we know about the car.

Citroen, a french carmaker released the C3 hatchback globally. The car is specially designed for the Indian and South American markets. It is the first model from the “C Cube” program launched by the company in 2019. The car will be manufactured in the company’s facility in Tamil Nadu and is expected to go on sale in early-2022.

Talking about the design of the car, it was specially designed to fulfil local needs, including robustness, along with modern, prestigious lines, bursting with vitality. The size of the hatchback is kept 4m less to make it fall into a lower tax band. The company says it is focused on newly married consumers in their thirties and from the emerging middle class, with a comfortable income. Here are details about this new hatch.

The front of C3 houses the familiar Citroen bonnet and front grille. The front light design looks more like being inspired by Tata Punch which was recently introduced in the Indian market. The car is equipped with LED DRLs and headlights. At the rear of the car are beautifully designed LED tail lamps. Citroen says the platform is electric-ready, which means that there could be an EV version of C3 in future too. The company made the styling of the car to have more SUV like characteristics in a hatchback. The two chrome bars on the bonnet look like holding the company badge.

The Citroen C3 will come with 180 mm of ground clearance and big alloys which should be good enough for bad roads. It also has a 10m turning radius, making it an easily manoeuvrable vehicle. The car will be available in 4 colours Orange-White dual-tone, Orange-Black, Blue-White and Grey-Black combinations. 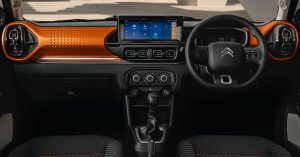 With a long wheelbase of 2,540 mm indicates the impressive interior space of the car. The car is big with ample headroom, leg space and elbow room for drivers and co-passengers as well. Citroen C3 gets a freestanding 10-inch touchscreen infotainment screen with Apple CarPlay and Android Auto compatibility and is packed with a number of speakers, along with controls on the steering. Looking at the ease for Indian consumers, the company also equipped a phone clamp positioned next to the AC vents on the dashboard.

The exact reveal dates are under the wraps by the company but we can expect the launch of the car to be in early 2022. For engine configuration, it is expected the company will likely get a 1.2-litre turbocharged petrol mill. The pricing for the car is expected to be 7 lakhs. Citroen C3 will lock horns with Maruti Suzuki Vitara Brezza, Hyundai Venue, Kia Sonet, Nissan Magnite, Renault Kiger and Mahindra XUV300

Vipul Chandwanihttps://www.motorbridge.com/
Previous article
TVS Raider 125 launched in India with a price tag of Rs 77,500
Next article
Force Gurkha debut date set on September 27: Here is everything to know