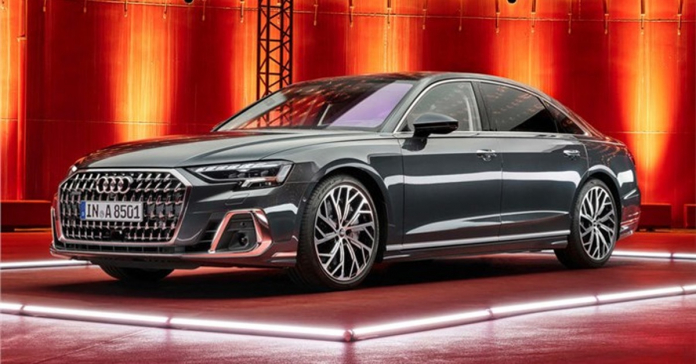 A new sharp-looking Audi A8 was launched by the company.

Audi A8 is the top of the line luxury sedan by the company and is a symbol of pure comfort and luxury. Audi unveiled the new A8 with design revamps and other accessories. The luxury sedan now has a wider grill and bigger mesh pattern to cool down the massive engine used in the car. The company added the new S Line package for the first time in A8 which will include S8 inspired blades and side intakes. The car still carries the chrome and black paint scheme which was available in the pre-facelift model.

There is a new colour scheme on offer with 4 new metallic and 5 new matte shades. The new car will sport the company’s trademark Digital Matrix LED headlights, which use around 1.3 million micro-mirrors to split the light into individual pixels lighting up the darkest of places. The brake lights use an OLED panel now with the addition of proximity sensors that will activate them when another car comes within two metres of standing A8.

Talking about the interiors the car will sport two 10.1-inch infotainment screens in the rear with a touch-controlled remote on the armrest. The exotic foldout central control system and perfume functionality remain the same. The facelift now also has 40 driver assistance systems over several different packages. The parking package especially is an interesting one as it helps the car to automatically manual car in and out of parallel parking. The City package has a 360-degree safety system that lifts the suspension for impact protection. 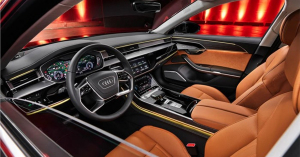 Read Also: SKETCH DESIGN OF SKODA SLAVIA REVEALED AHEAD OF ITS LAUNCH

The company is also planning to launch a  top of the line A8 L Horch variant specifically for China. In the world, 60% of A8’s sales are covered by the country. The car is designed in such a way to give competition to luxury opponents like  Mercedes-Maybach S-class. The new model of the same is expected to launch next year. The Horch model is 130mm longer than the L variant of A8. The car will be pure luxury with diamond quilting, rear floor mats and foot-massaging relaxation seats as standard.

Powering the car is the six-cylinder 3.0 TDI diesel engine producing 286hp of power. The petrol option consists of 6 cylinders 3.0 TFSI petrol producing 340hp. The last TFSIe plug-in hybrid electric option delivers a mammoth 461hp. All the engines are married to an eight-speed ‘Tiptronic’ automatic gearbox and Audi’s ‘Quattro’ all-wheel-drive system. For India, only the Diesel variant will be imported as CBU (completely built unit) and the pricing will start from Rs 1.8 crore ex-showroom, India.